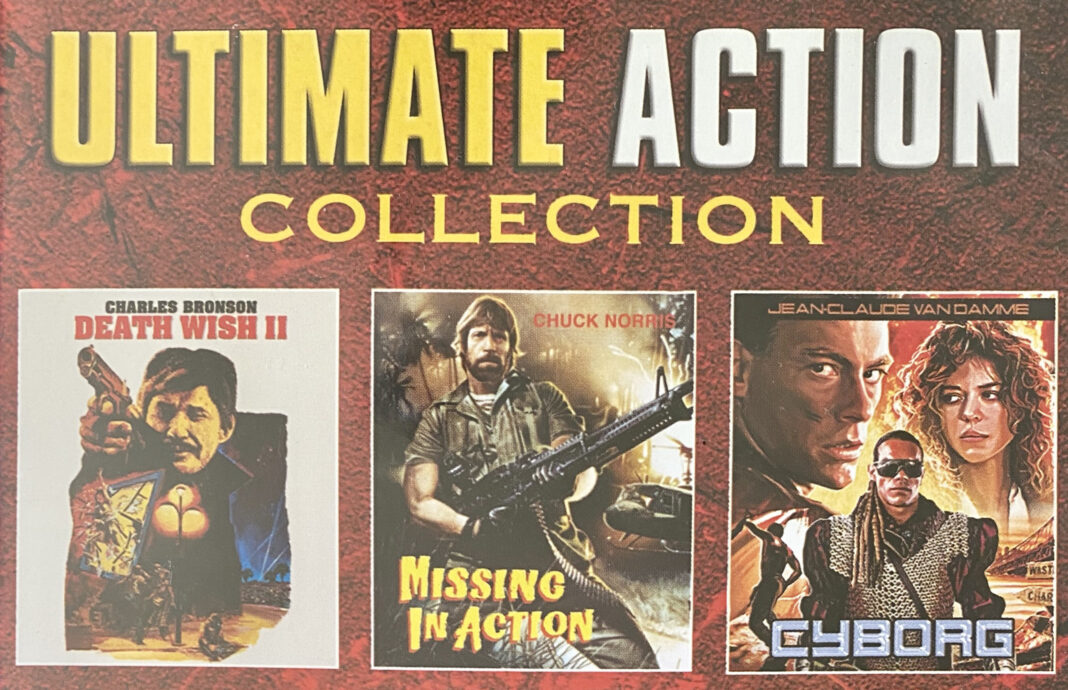 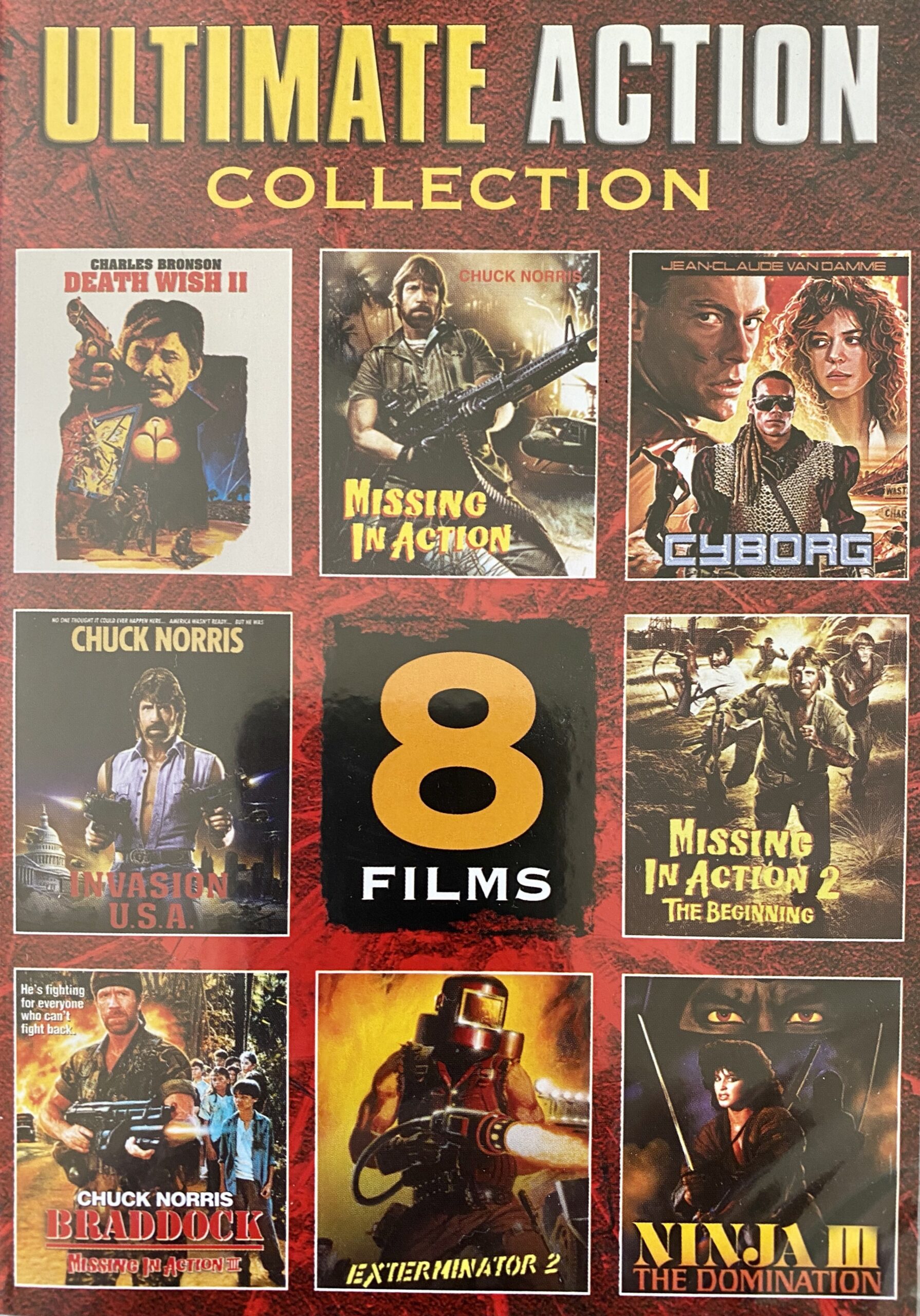 If you’re anything like me, a significant percentage of your DVD collection came from the $5 bin. There’s no shame in it, I tell myself. Surely, we’ve all been there at various stages in our lives, rummaging around for whatever scraps of entertainment and hidden gems lie in its depths. Sometimes you find the stray Cobra or bare-bones edition of Point Break. Earlier this year however, the gods of physical media bestowed upon me a particularly wondrous gift, a singular collection of action movies at an unparalleled value. Eight Cannon Films flicks, plucked from the golden age of its library, grace two discs that are unburdened by special features and previews.

Today, I summoned the will to complete the journey from which I embarked months ago. From the swamps of Exterminator 2 to the mountain tops of the Missing In Action trilogy, I’ve roundly experienced their sorrows and joys. Here is the ultimate hot wash of that momentous mission along with my exclusive and totally objective five-point rating unique to each film. May the DVD deities favor your next adventure to Walmart or wherever fine movies are sold near you!

Down and Dirty: Paul Kersey moves out to LA erroneously thinking that it’s a safer community than NYC. Just when things seem normal, sure enough, another random street gang shows up in his life to rape and kill his previously traumatized daughter and housekeeper. Kersey recovers his favorite watch cap and Beretta to hunt down the thugs by happening upon them one-by-one in the only scuzzy part of LA, apparently. An aging Bronson and B-movie auteur Michael Winner turn 70s-style grit into 80s hardboiled action in this serviceable follow-up to the 1974 classic.

Ultimate Action Greatness: When a trio of Kersey’s targets exchange drugs, stored in their fanny packs, for guns, from a dealer wearing a pink silk shirt with rainbow suspenders, the conditions are right for all hell to break loose. Despite being seriously outnumbered, Kersey gets the upper hand somehow and the sequence ends with an exploding car.

Down and Dirty: James Braddock picks up John Rambo’s torch in the first of a series of explosive ‘Namsploitation films that launched Chuck Norris’ collaboration with the Cannon Group. Col. Braddock is sent on a diplomatic mission to Vietnam to investigate whether POWs are still being held captive. Well, Braddock knows for darn sure because his buddies from Missing in Action 2 are still there, so he contracts some comic relief to assist in a covert jailbreak using only his finely-tuned infiltration skills and cat-like stealth…along with full-auto machine guns, grenades, and bazookas.

Ultimate Action Greatness: The amphibious assault to spring the POWs from the Vietnamese convoy. The sequence features a combat pontoon boat that gets totally rocked, only for an unscathed Braddock to emerge from the water with his M-60 blazing and absolutely demolishing the enemy. This legendary scene is one of the greatest moments in 80s action history.

Down and Dirty: This was supposed to be the first Missing In Action, and both movies were filmed at the same time, but Golan and Globus thought the original sequel had more exciting action. So, the sequel became the original and original became a prequel. Get it? MIA 2 aligns more closely with Bridge on the River Kwai. It develops the POW characters and shows what they sacrificed and how they endured cruelty and physical hardships. This serves as the backstory and establishes Braddock’s entire motivation in Missing In Action.

Ultimate Action Greatness: Although there is a fair amount of grenade tossing and gunfighting towards the end of the movie, the hand-to-hand combat scenes with collaborator Nester and camp commandant Col. Yin feel raw and more personal. These scenes carry more weight for the characters and overall plot, so they are more effective in this story vs. more traditional Cannon action schlock.

Down and Dirty: Col. Braddock discovers his wartime wife is still alive and had his kid 12 years ago, so he suits up for a raucous family reunion in the jungles of Vietnam. The rescue expands to an exfiltration mission to transport war orphans to the Thailand border. After a series of explosions and helicopter standoffs, Col. Braddock saves the day yet again. We’re about due for Braddock’s adult son to go on some adventures of his own. Praying for an MIA 4…

Ultimate Action Greatness: Braddock acquires a ridiculous omni-gun that’s part machine gun, grenade launcher, and sword, which he uses to great effect breaking the orphans out of the prison camp. In a scene that would make Commando jealous, Chuck stands in the middle of an open courtyard and demolishes a few guard towers and a dozen or so guards with the contraption.

Down and Dirty: The future is devastated by a plague and it’s dominated by street gang pirates that looted the same sporting goods stores from Road Warrior. An inexplicable cyborg lady seeks the help of Jean-Claude Van Damme, a hired gun, to escort her from New York to Atlanta, so she can upload the cure for the plague to scientists based there. The pirate gang, who have a pirate ship and all, gets wise to the plan and steals Cyborgette, so they can collect a ransom or reward or whatever from the Peach State scientists. Either way, she’s going to Atlanta, so I guess it doesn’t really matter who’s getting her there and frankly, I’d rather go in style on the pirate ship.

Ultimate Action Greatness: An otherwise mediocre movie ends with a knock-down, drag-out fight between JCVD and a constantly roaring Vincent Klyn. The pouring rain and water-resistant garbage fires provide an excellent backdrop to this brutal hand-to-hand combat sequence. I think by the end, the filmmakers forgot that Vincent Klyn was playing a regular human bad guy and turned him into a ferocious mutant monster with advanced healing powers. Either way, we get quite a few minutes of aesthetically pleasing carnage along with an exploding pirate goon for good measure.

Down and Dirty: A motley crew of commies storm Florida in order to set up a base, from which they will conquer the land of the free and the home of a denim-wearing, Uzi-packing Chuck Norris. B-movie villain veteran, Richard Lynch takes on Chuck along with a few tanks and several battalions of terrorists. This is the quintessential Cannon movie that’s chock – sorry – Chuck full of explosions, roundhouse kicking, and gunfighting action. And it all takes place during the Christmas season, so add this one to your Yuletide watchlist alongside Die Hard and Rocky IV.

Ultimate Action Greatness: So hard to pick just one. Chuck drives his pick-up into a festively decorated mall and totally wrecks the holiday shopping experience for dozens of local Floridians. Car chases, gunfights, punching, explosions, plowing through hundreds of feet of Christmas decorations, this scene rivals the Blues Brothers in terms of thrilling interior destruction.

Down and Dirty: Watch nice guy Robert Ginty occasionally strap on his flamethrower to take on the gutter trash forces of “X” the crime lord. X is played by a young Mario Van Peebles who makes his feature film debut in the cheesiest way possible. We get a whole lot of Ginty and not nearly enough BBQ’d bad guy in this lackluster sequel.

Ultimate Action Greatness: Ginty upgrades his buddy’s garbage truck A-Team-style and sets up a trap in an abandoned factory. He mows down the baddies with an assortment of machine guns, rocket launchers, a chomping man-eating snow plow, and a series of Home Alone booby traps.

Down and Dirty: It takes several nasal cavities worth of blow to come up with a narrative involving a haunted arcade game, demonic ninja possessions, a magic sword, aerobics, and some light phone-line repair. The possessed Christie and her hairy cop boyfriend must figure out how to expel her ninja spirit, either by performing an intense aerobics routine or completing a mystical ceremony in a hidden mountain-top temple. It gets weird but Sho Kosugi shines through the fog of silliness to deliver some truly outstanding martial arts sequences and fight choreography.

Ultimate Action Greatness: The seemingly indestructible demon ninja is having none of the modern game of golf with a protracted fight scene on the green with dozens of kills, a multi-vehicle pursuit, neutralizing a police helicopter by hand, and a shootout involving dozens of rifles and shurikens. This sequence is one of the greatest first acts in Cannon’s filmography.

*Shout out to the Internet Movie Firearm Database (imfdb.org) for assisting me in identifying the weapons used in these productions, even the fake ones.