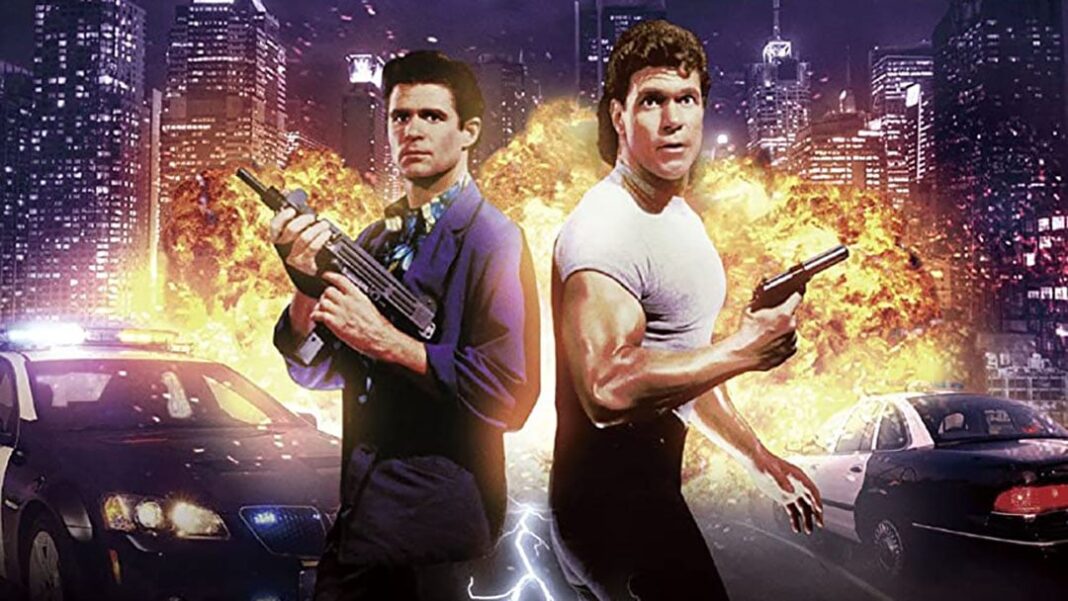 Looking back at the horror/action lost classic starring Treat Williams and Joe Piscopo. 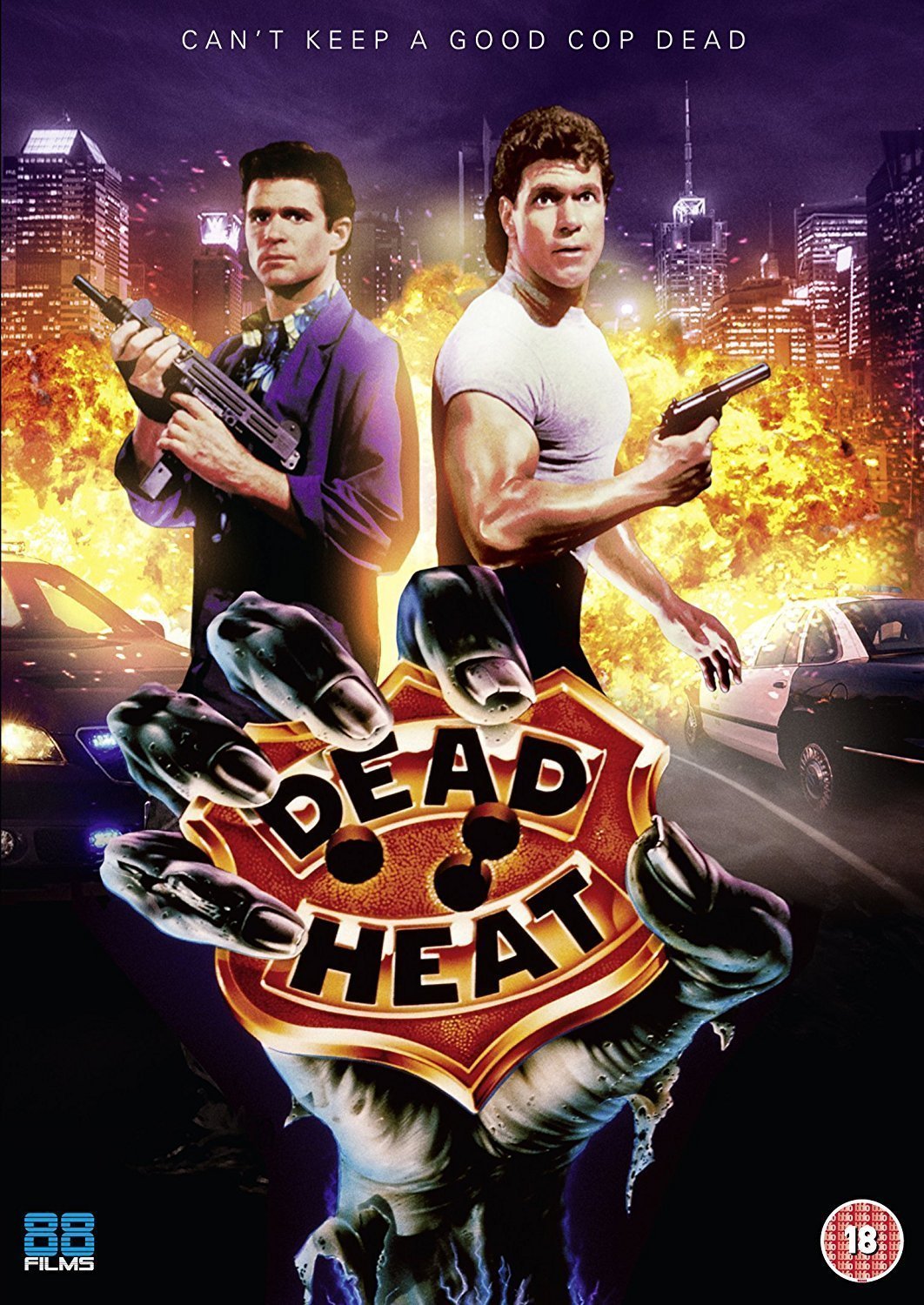 Well it’s that time of year again that I start digging deep into my collection to find a movie that gets me into the Halloween spirit. Boy did I find a gem of a classic that I had sadly forgotten about…Dead Heat… and I wasn’t disappointed (more so that I had gone 20+ years not watching this).

Dead Heat gave me everything I wanted in a Halloween movie, undead zombies, malevolent forces at work, and gore/sfx. It also gave me everything I love about an 80s action movie, buddy cop partners, gunplay, one-liners, kickass car, and fair amount of comedy. Let me take a moment and give those who may not be familiar a quick rundown of Dead Heat…

Dead Heat stars a fantastic and unlikely team up of actors Treat Williams (Everwood) as Det. Rodger Mortis the clean-cut strait-laced cop and Joe Piscopo (Saturday Night Live) as Det. Doug Bigelow the buff comedic relief in a supernatural buddy cop action movie. It even offers an unexpected role by one of the legendary masters of horror Vincent Price as Arthur Lowdermilk and a welcomed appearance from one of my favorite movie henchmen Professor Toru Tanaka (Odd Job) as The Butcher. Directed by Mark Goldblatt (Punisher starring Dolph Lundgren) and written by Shane Black’s (Lethal Weapon/Predator) younger brother Terry Black (Tales from the Crypt).

The movie starts just like any other action movie does with the duo driving a bright red 1960 convertible Impala being called to a robbery in progress at a jewelry store, but takes a fairly quick turn from the norm during the shootout as the police riddle the bad guys with bullets yet they refuse to die or even fall down.

The only things that actually stop the thieves is one inadvertently blows himself up with a grenade and the other is pretty much cut in half when Mortis rams him with a car. Afterwards Det. Mortis (Treat Williams) and Det. Bigelow (Joe Piscopo) meet with the coroner examining the corpses of the robbers only to recognize the thieves because she had performed the autopsy on them both prior to that day’s events. 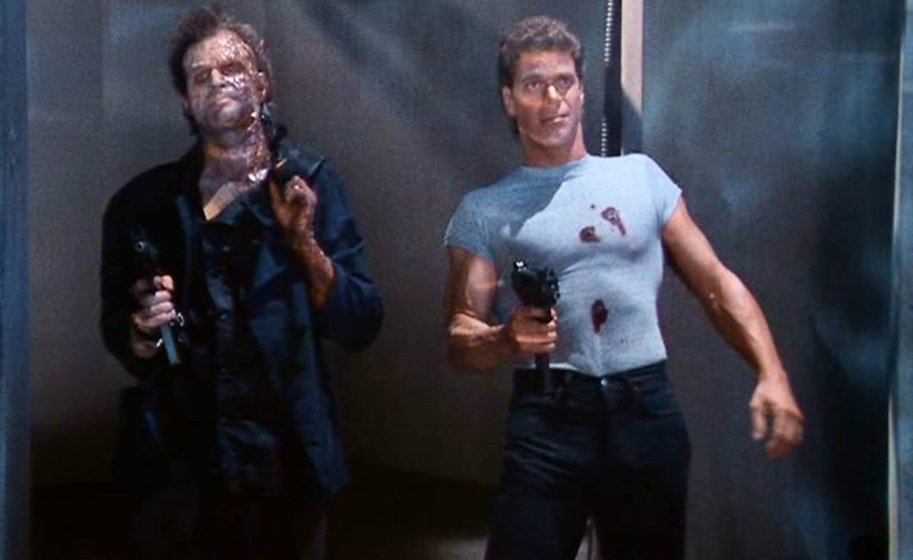 Fast-forward thru some generic 80s detective work where a drug was found in the bodies that linked them Dante Pharmaceuticals and they find themselves at ground zero for the creation of zombies by the Resurrection Machine (god I love the 80s). While snooping around they awaken a rather large grotesque biker laying on the machine and during the fight Det. Mortis (Treat Williams) finds himself trapped in a large vacuum chamber room that gets activated during the scuffle where he suffocates.

Afterwards the police arrive at the crime scene along with the coroner who with the help of Det. Bigelow (Joe Piscopo) place the body of his dead partner onto the Resurrection Machine and activate it apparently bringing him to life or he at least appears to be alive.

Now the real fun begins as we get to watch Det. Mortis (Treat Williams) slowly start to decompose throughout the movie with the help of special effects artist Steve Johnson which in my opinion continually get better and more gruesome at each passing scene in the movie. And brings us to one of the most hilarious and gory scenes in Dead Heat… the battle with The Butcher (Professor Toru Tanaka) and the resurrected carcasses of the animals in the Chinese restaurant that come to life with the help of a small version of the Resurrection Machine.

Seriously, they fight reanimated ducks, fish, and a bull…its gross, zany, and over the top with nonstop one-liners from both lead actors….and I loved every second of it. For a movie made in the late 80s (the movie released in 1988) I feel the effects in Dead Heat hold up well for stop motion and practical effects, I don’t always need modern CGI. Sometimes I like knowing the actors were actually covered in blood and had to respond to actual props not green screened stand-ins.

The Hidden: A Review on 80s Excess and Action 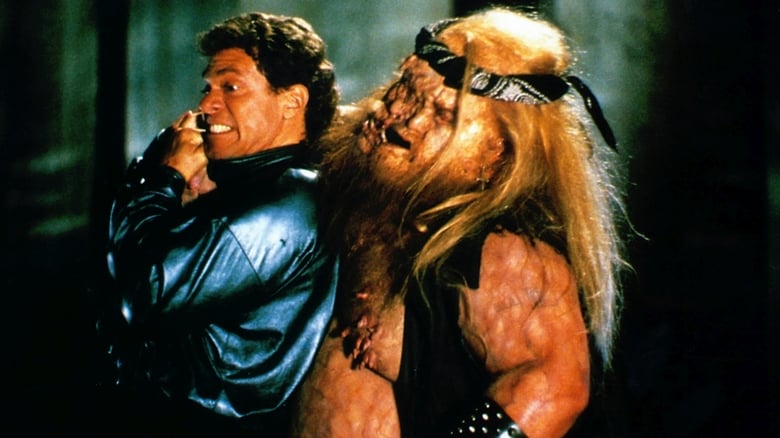 I want to take a minute now to mention how underrated Treat Williams and Joe Piscopo are, while Treat Williams has led a long career in Broadway and cinema, I still find people who have never heard of him or always respond “oh yeah, that guy”. He plays the straight shooter role perfectly in my opinion (go watch Deep Rising) and he really fits the action roles well.

Now I’ve got a bone to pick with Hollywood concerning Joe Piscopo, while he garnered popularity in Saturday Night Live and a handful of roles afterward, this man deserved to be more mainstream than they allowed him to be. He was a hilarious comedian in the 80s and had the physique to be put in any number of action movies (go watch Sidekicks with Chuck Norris if you don’t believe me) the world missed out on Joe Piscopo. Okay…. back to the review, had to get that off my chest….

I’ll start by saying I’m not going to spoil this movie if you haven’t seen it yet as I want everyone to go watch this movie (its on Amazon Prime as of me writing this). The climactic conclusion of Dead Heat delivers in every way possible from gross-out gore to car crashes to machine gun shoot outs. All culminating in the evil plot reveal which always had to be spoken aloud in 80s action movies by the bad guys.

In all Dead Heat gave me everything I was looking for in an action/horror/comedy, is it the best ever….no, but we don’t watch these movies to see the next Oscar worthy performance. Give me a movie that provides an escape from the real-world chaos, puts a smile on my face, doesn’t take itself too seriously and allows me to enjoy something that in my opinion is missing in cinema today. Go take a chance and pop some popcorn, crack open your favorite beverage and watch Dead Heat.

Article by Charlie Chase – author bio: Growing up in rural Virginia most of my favorite memories are usually tied around action/sci-fi movies, and I’m now able to share those movies with my oldest. I have a passion for action movies especially, so much so I created a Facebook group called Give Me Back My Action Movies where we can discuss what made early action movies far superior to what Hollywood makes now. And because I crave talking about them so much, I decided to jump into writing about them and so far, I’m loving it so I hope I do it justice.