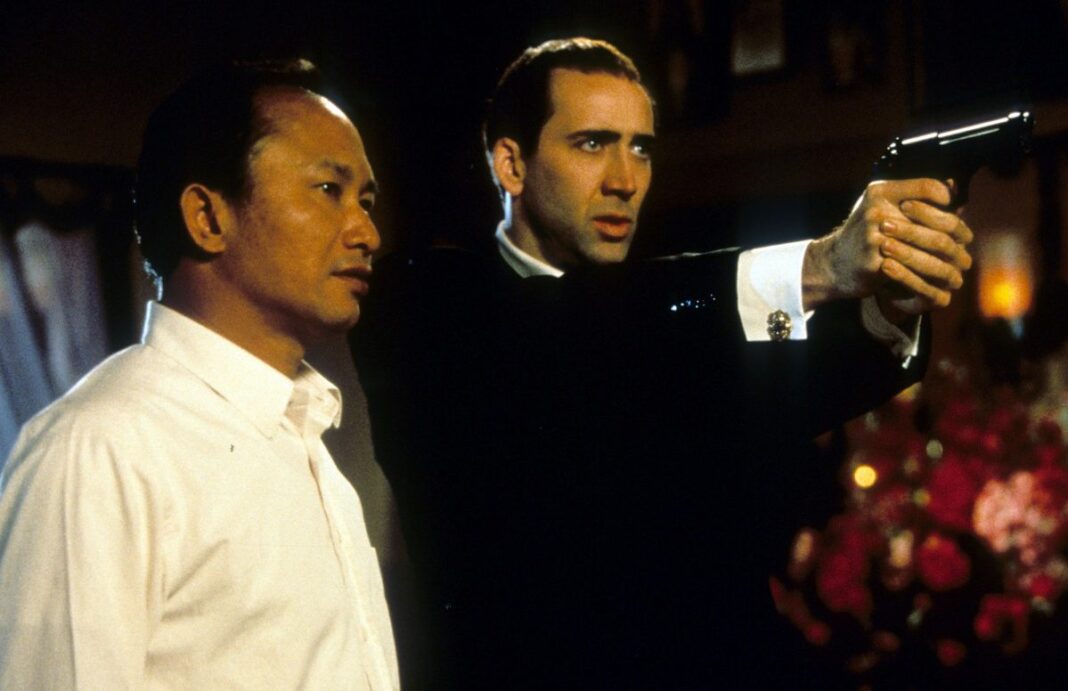 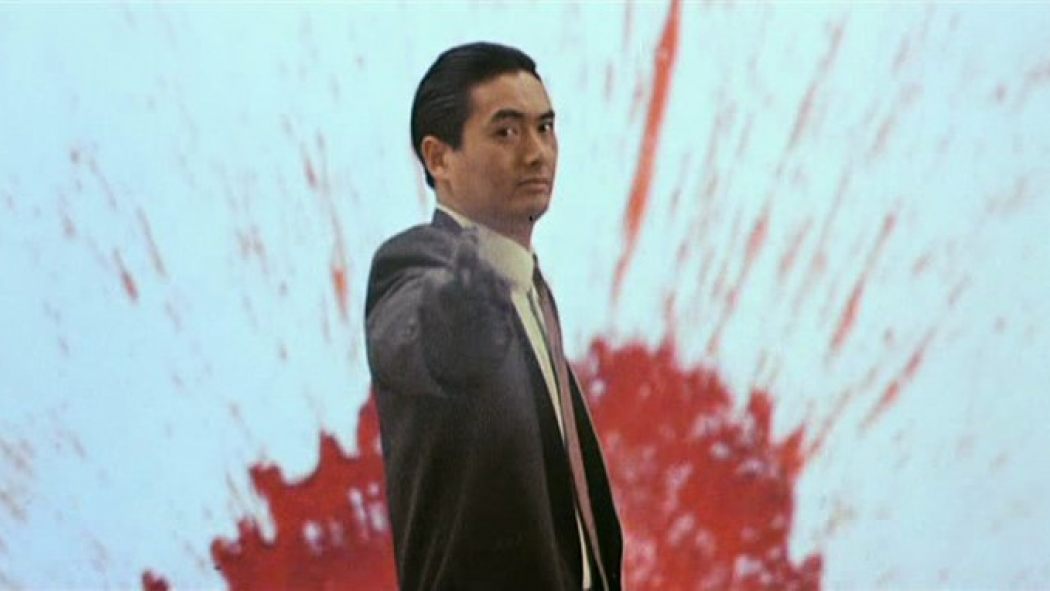 Few action movie directors have attained as much prominence as Hong Kong’s John Woo. Hailed for creating the Heroic Bloodshed sub-genre, his films were loaded to the brim with passion and creativity. With his Gun Fu, he reinvented shootout sequences in action films, and combined them with an elaborate cinematography and ultra-bloody violence. Woo is a poet of action cinema who has created many unshakable masterpieces of the genre in his career, and in this article we present the Ultimate Action Movie Club’s 10 favorite films from the legendary director!

Woo’s second US production is a classic 1990s action blockbuster, and possibly the film with most helicopters getting thrashed in movie history. Major Vic Deakins (John Travolta) crashes a stealth bomber carrying two nuclear weapons to collect a big ransom from the government, and only his co-pilot Riley (Christian Slater) can stop him. Shootouts, car chases and an absolute overkill of explosions, the film moves at a relentless pace with one action-packed set piece after another.

Travolta goes completely unhinged and delivers a manic performance. He also goes out with a smile on his face in one of the best villain death scenes I’ve ever seen. Broken Arrow is as straightforward as an action film can get, but Woo’s stylish and energetic direction make it an entertaining minor classic of US action cinema.

Two years before Woo landed his first classic A Better Tomorrow he already took a successful venture into the action genre. The plot is as generic as the title of the film: A group of Hong Kong mercenaries is tasked to capture the leader of a drug trafficking ring in the golden triangle between Thailand, Myanmar and Laos, and faces much resistance. I don’t know what the popularity of military-style action was in in Hong Kong in the 1980s but the film shares many similarities with the Cannon productions and the cheap Italian war movies of the same decade.

Woo’s first US production is not exactly a treat for fans of Woo, the auteur, but definitely for fans of John Woo, Master of Mayhem. The plot is yet another variation of the manhunt for decadent rich folks theme. Chance Boudreaux (Jean-Claude Van Damme) also becomes their prey when he tries to find a missing person in New Orleans.

Hard Target only has hints of Woo’s iconic style here and there, but it’s still a blast of an action film with giant explosions, motorcycle chases, and plenty of shootouts. His star Van Damme lacks the charisma of a Chow-Yun Fat, but he does not disappoint as a bad-ass action hero. And Hard Target features not one but two of the most awesome hand grenade kills ever shown on screen!

After ten years of working for US studios, Woo returned to his home country and adapted the historic battle of Red Cliffs into a feature film. In the 3rd Century AD, a coalition of warlords from Southern China faces the overwhelming forces of the North. Woo created a war epic of almost five hours length distributed over two films that seamlessly connect to each other. The movies effortlessly switch between drama, philosophy and battle action. The production values of the film are spectacular, as is the execution of the massive battle sequences.

Some scenes go a bit over the top in their heroism, and we will never know if the portrayal of the righteous characters from the South vs. the Machiavellian clique from the North is even remotely grounded in reality. But it doesn’t matter, and the final battle is of such a ferocity, excitement and epicness, it makes Braveheart and Gladiator look like child’s play. Red Cliff is the ultimate historic war drama!

Bullet in the Head is a very different beast from Woo’s other action films of the 1980s. Pathos and melancholy make way for a much darker tone in this tale of three friends who see their dreams getting shattered. Their journey from being gang members in Hong Kong to building a smuggling business in war-ridden Saigon, and being haunted by the terrors of the war after their return to Hong Kong, is a grim and ultraviolet epic.

It’s a gripping tale with plenty of intense action sequences that propel the story effectively. The shootouts are masterfully staged, and feature a raw brutality not found in Woo’s other works from that era. Bullet in the Head is two hours of action-packed tragedy, and another absolute highlight of Woo’s career!

After a few years it seemed Woo finally got warmed up to working in Hollywood and delivered his American opus magnum. Terrorist Castor Troy and FBI agent Sean Archer swap their faces as part of a plan to infiltrate Troy’s organization. Things don’t go as planned, though, and the chaos unfolds. An outlandish plot and eccentric performances by John Travolta and Nicolas Cage collide with insane set pieces. Just as in Woo’s Hong Kong classics bullets are flying left and right, and the next explosion is never far away.

Woo stages the feud between Troy and Archer with elegant takes, and created some of the most spectacular action scenes that you will find in a movie from the 1990s. Every single action sequence is pure awesomeness, be it a helicopter dueling with an airplane, plenty of Gun-Fu mayhem, and an explosive boat chase. It misses the deep pathos of his classics, but maybe Face/Off is just Woo just having a lot of fun, and in any case it is pretty much as perfect as a Hollywood actioner can get.

With A Better Tomorrow, Woo invented the Heroic Bloodshed genre, and introduced the world to Gun Fu and brutality in style. Former gangster Ho is released from prison and seeks to make amends with his younger brother Kit, a police officer. Ho tries to live an honest life, but his past catches up with him in the worst possible way. With A Better Tomorrow, Woo created a template for his later movies, with many of his thematic and stylistic trademarks being present already. The story is full of pathos (occasionally bordering on kitsch), characters that are torn between loyalty and righteousness, and excessively bloody shootouts.

Chow Yun-Fat in his role as Ho’s left hand Mark became a chain-smoking fashion icon and the coolest bad-ass of the action genre overnight. A Better Tomorrow also marked the start of his collaboration with Woo, and several more masterpieces would follow. The action sequences are all awesome, but are staged on a comparatively modest scale, and are less slick compared to Woo’s later films. But none of that doesn’t diminish the groundbreaking masterpiece A Better Tomorrow is!

Just one year after Woo landed his first masterpiece A Better Tomorrow, he followed up with a sequel. Brothers Ho and Kit return, and go undercover to infiltrate a counterfeiting ring. Chow-Yun Fat also makes a return as Ken, the twin brother of Mark (who died in the first film).

It’s a cheap trick to bring Chow-Yun Fat back from the dead, of course, but no complaints, it’s awesome to see him return!

Woo created several iconic set pieces that have been copied endless times since then. A Better Tomorrow 2 is really the first film where he fully implemented his unique vision on filming action sequences, with a stylish cinematography, and ultra-violent shootouts in slow motion. The bloodsoaked finale is one of the most intense and insane action sequences ever created in the history of cinema with bodies literally piling up on the floor. A Better Tomorrow 2 is one of the greatest excesses of cinematic violence.

The Explosive Action of the Hong Kong Thriller ‘Shock Wave’ (2017)

John Woo’s last film before he went to Hollywood is the very essence of action cinema, a force of nature. Two hard-ass cops (Chow-Yun Fat and Tony Leung) team up to take down a crime cartel and its boss. If you find Woo’s previous films too melodramatic or even cheesy, Hard Boiled may even be Woo’s best film for you, as it is a relatively unsentimental actioner by comparison.

The action choreography is the best Woo ever created, with one massive bullet storm after another, each one filmed on an astonishing scale and with a level of detail that is hard to grasp. And the film’s finale is and will forever be the best action sequence in the history of cinema, a slow-mo annihilation of everyone and everything!

Woo garnered much acclaim with his A Better Tomorrow films, but with The Killer he perfected his style and created one of the best action films to ever see the light of day. It’s another simple premise: Contract killer Jeffrey (Chow-Yun Fat) accidentally injures the singer Li during a job. To prevent her from losing her eyesight, he takes one last assignment so he can pay for an expensive operation. His mission is put into jeopardy when a hard-nosed cop and a treacherous mafia boss are at his heels.

The Killer is the ultimate romantic action film, a poem written in blood. Woo cranks the pathos to the absolute maximum with brooding characters and a pervasive melancholy. It’s beautifully directed with atmospheric images that will irresistibly draw you in. It’s also another showcase of his qualities as an action director with rivers of blood and a triple-digits body count. The Killer marginally concedes first place in quality of the shootouts to Hard Boiled, but it is Woo’s most intense and complete film.

The Top 15 Action Movie Bar Fights of All Time