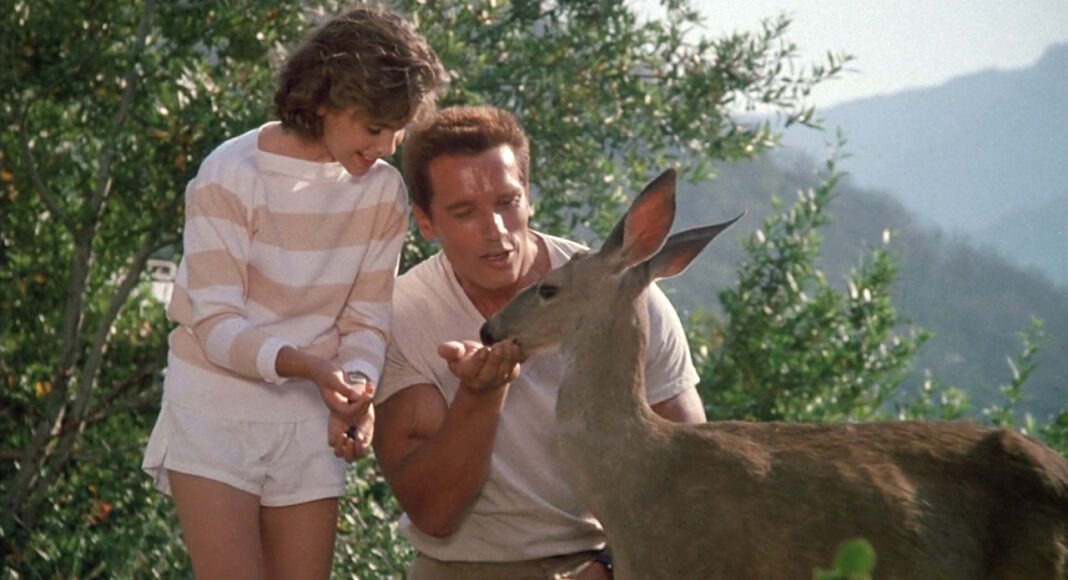 Ranking the best and most ultimate action movies to watch on Father’s Day. (Or any day really, these are all awesome flicks!)

Another Father’s Day is upon us. And for this occasion we have compiled a list of films for all the fathers out there who love action movies. In this Top 10 list you’ll find the full spectrum of dad types in action flicks, from total jerk over ex-con and master assassin to perfect super-dad.

What all these father figures have in common is that they ultimately deeply care for their children, and are willing to protect them at any cost, mostly by breaking bones or putting bullets into whoever gets in their way.

So to all the father’s, keep up the good work, and if you like, you can round off Father’s Day by watching one of the awesome films on our list!

After his temporary fall from grace in Hollywood, Mel Gibson took on a couple of roles that seemed to reflect on his personal troubles he had several years before. One of them is Blood Father, where he portrays the repentant ex-con and recovering alcoholic John. He is sought out by his estranged daughter Lydia, who herself is neck-deep in trouble and on the run from some gangbangers.

Both realize they need each other if they ever want to have lead a life again that resembles normalcy. Together John and Lydia embark on a journey to escape from her pursuers, and leave a trail of bodies in their wake. The film effortlessly switches from sincere drama to brutal action with plenty of foul-mouthed dialogues, and is another – but excellent – iteration of the classical story about a criminal who gets to atone for his past misdeeds by saving another life.

Director Neil Blomkamp and lead actor Sharlto Copley landed a coup with this Sci-Fi action masterpiece, a powerful metaphor on human cruelty and xenophobia in general, and the South African apartheid regime in particular. An alien spaceship appears over Johannesburg, and the inhabitants are locked into camps where they dwell under catastrophic circumstances. Bureaucrat Wikus van de Merve is tasked with relocating the aliens to a different camp. After an accident he undergoes a grotesque transformation and starts to question his motives.

Copley acts with an intensity as if Blomkamp constantly held a gun to his head when filming. The films also has tons of spectacular and violent action as Wikus and his allies need to fend off bandit gangs and mercenaries with advanced alien weaponry. And while Wikus is the main character, his interactions with the alien Christopher and his small kid are some of the defining moments of the film, and Christopher’s valiant and violent struggle to craft a better future for his son and whole race are the reason why District 9 more than deserves its spot on our list.

Kick-Ass is a clever and charming production with plenty of slapstick humor and bloody violence. The movie tells the story of comic book nerd Dave who decides to become the superhero Kick-Ass. Even though he has no superpowers, he still manages to build up a reputation as a vigilante. This gets him the attention of a local crime boss, but also of two real superheroes who are less than charmed by his attempts to imitate them.

The central character of Kick-Ass is Dave, but the film allocates an equal amount of screen time to the relations of two fathers and their offspring. On the side of Good we have Big Daddy (played by Nicolas Cage) who has devoted his life to turn his 12-year old daughter into a killing machine. On the opposing side there’s crime lord Frank D’Amico, who has some trouble figuring out how to raise his son. On the path to their inevitable confrontation plenty of blood is spilled and bones are shattered, which combined with its wacky sense of humor make Kick-Ass one of the best superhero comedies to this day.

Another iconic script from Shane Black resulted in one of the funniest and most violent buddy comedies to ever come out of of Hollywood, a foul-mouthed and sometimes chaotic action-packed  spectacle. Bruce Willis as scruffy private investigator Joe and Damon Wayans as professional football player Jimmie with a gambling problem team up to find out who murdered Jimmie’s girlfriend.

They stir up a hornet’s nest of political corruption and soon not only Joe’s and Jimmie’s life are on the line, but also that of Joe’s family. Bruce Willis’ character could be that of a John McClane who took a couple of wrong turns in his life. He’s certainly not a role model for his daughter Darian and a complete failure as a parent. The only thing Darian learned from him is how to talk back, and in one of the many great scenes of this film they engage in an incredible insult contest.

Sudden Death is a formidable Die Hard clone, and one of Van Damme’s best movies. It’s also a story about a father and his unconditional love for his children. Fire marshal Darren works at the Pittsburgh Hockey Arena, and takes his daughter and son to the Stanley Cup final. On the very same day terrorists take the US vice president hostage in the VIP arena of the stadium and threaten to blow it up if they’re not paid a ransom. Darren’s daughter Emily is also taken by the criminals, and he becomes a one-man army to rescue her and the entire audience.

In addition to doing what he does best (kicking and shooting people), Van Damme puts on a surprisingly convincing performance as a family guy. He’s the perfect dad, kind and loving, who on top of that has the skills to free his kids from the grip of ex-CIA agent Foss and his henchmen. Foss is played by Powers Boothe in one of his great roles as eloquent terrorist mastermind that takes sadistic pleasure in intimidating Emily who bravely defies him, however.

With Taken, Liam Neeson reinvented himself and created his own sub-genre of action movies. Taken is a modern upgrade of the Commando type of plot line, and delivers a perfect mix of thrills and action. It’s flawlessly executed, and looks slick enough to appeal to a wide audience. Ex-CIA operative Bryan Mills has to witness the abduction of his daughter Kim by a human trafficking ring while he’s on the phone with her.

Putting his “very particular set of skills” to use he goes on a rampage through Paris to track down and eliminate his daughter’s captors without the slightest remorse. Liam Neeson’s excellent acting and intense physical performance are the main reason why Taken has become a minor classic of modern action cinema.

John Connor’s father is dead, his mother locked up in an asylum, and the most unlikely creature becomes a sort of father surrogate for him: A reprogrammed T-800 sent from the future to protect John and his mother. Terminator 2 is one of the ultimate action classics of all time, and one aspect that contributes to its greatness is that director James Cameron masterfully manages to establish a close relationship between John Connor and the T-800, and puts a spin on the traditional trinity of mother, father and child.

While completely devoid of any fatherly instincts, the T-800 actually does what a good father would do, defend John’s life at all costs against the T-1000, in Sarah Connor’s words: “Of all the would-be fathers who came and went over the years, this thing, this machine, was the only one who measured up.”

Dr. Henry Jones Jr. and Sr. fight and quarrel their way through this fantastic third installment of the Indiana Jones franchise. Harrison Ford is joined by Sean Connery, and together they form one of the greatest father-son duos in action movie history. After rescuing his father from Nazi captivity, Indy has to endure his constant criticism about his violent resolution of dangerous situations.

The two board a German Zeppelin incognito, and finally get a peaceful moment to catch up. The conversation is anything but harmonic, and especially Dr. Jones Jr. is not stingy with criticism about his upbringing (“I was less important to you than people who’ve been dead for 500 years in another country!”). Ultimately, the two develop a strong relationship for the first time in their life which shows how easily a father-son relation can be restored when one is being threatened by Nazis and supernatural powers.

Any child would want to have a father that is as caring and bad-ass at the same time as John Matrix in Commando. The opening sequence already gives us an overdose of father-daughter happiness that includes eating ice cream, silly joking and petting a fawn, it’s the perfect life. Things go south quickly, however, as Matrix’ past catches up with him.

His daughter is abducted by the henchmen of South American ex-dictator Arius who is trying to extort Matrix’ cooperation in assisting with a planned military coup. Arius and his goons soon find out that they messed with the wrong father, and Matrix amasses an incredible body count as he plows a swath of destruction through the country of Val Verde to rescue his daughter.

The ultimate movie for Father’s day is an another 1980s cult classic from Sylvester Stallone. It’s a modern fairy tale, a story about the ultimate father-son bond forged from tragedy. Lincoln makes a humble living as a trucker. His estranged and sick wife asks him to pick up his son Michael – who he never met before – from his boarding school and take him on the road. Michael first rejects him, but as they embark on their journey, the relationship improves, and Lincoln even introduces Michael to the art of arm-wrestling.

Over The Top is schmaltzy and cheesy, but radiates an incredibly positive attitude. On top of that we are taken into the fascinating world of arm-wrestling tournaments with its eccentric but likable characters. Stallone passes through the film like a saint, always doing the right thing while trying to teach his son valuable lessons for life that do not involve beating people up for a change! Trucking, arm-wrestling and an estranged father-son story make for great family entertainment and give us the perfect action movie for Father’s Day!