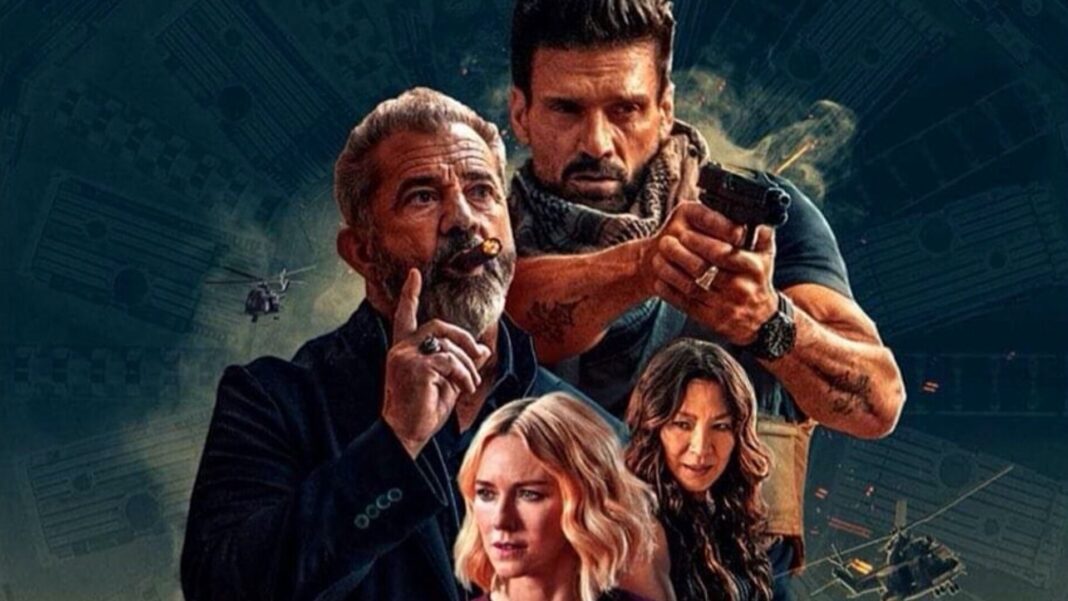 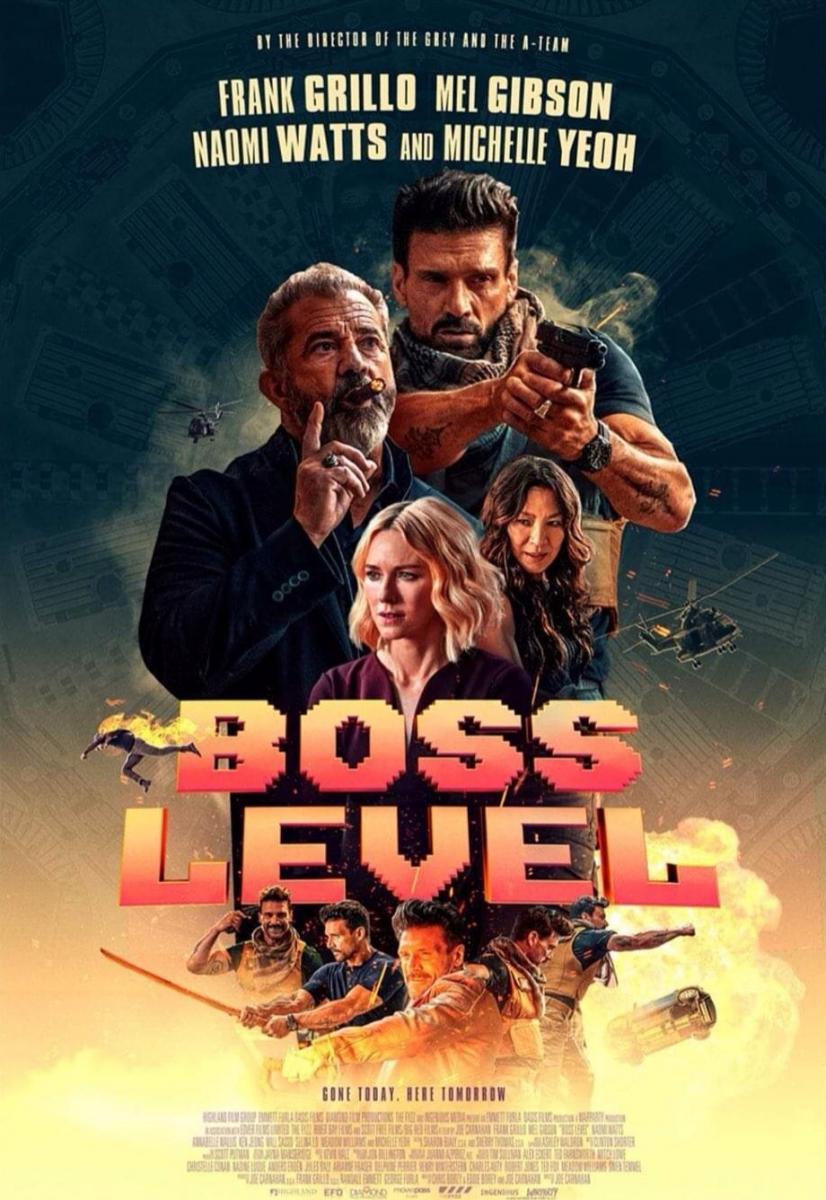 So, a couple of years back, word got out that director Joe Carnahan was reteaming with star/producing partner Frank Grillo for a movie called Boss Level, a balls out action flick with a plot synopsis that can only be described as Groundhog Day meets Crank. You know, the kind of film you can expect from Joe Carnahan. Listed as also among the cast was Naomi Watts, Michelle Yeoh, and Mel Gibson, among others. And frankly, I was in all the way right there.

But then I, like many other action fans, waited, and waited, and waited. Nothing came. Where the hell is Boss Level?? Why is it not coming out? No answer. I was actually starting to doubt it would ever come out. Then, we got a break. News broke that Hulu picked up the movie and was releasing it on March 5th, 2021. Action fans all over let out a sigh of relief. We were finally getting Boss Level! Now, we’re here. March 5th. I can finally watch the movie so many of us have been anticipating for what seems like forever. Well, was it worth it? Let’s dig in, shall we?

A retired special forces officer is trapped in a never ending time loop on the day of his death.

To describe Boss Level, I think I’ll quote my good friend Todd Gaines when he said: This is the most Frank Grillo movie ever made. And he’s absolutely correct! As a matter of fact, this is the most Frank Grillo & Joe Carnahan movie ever made! These two gentlemen have come together to make the first great action movie of 2021. No joke, Boss Level is non-stop mayhem from the opening shot and rarely ever lets up!

For starters, I’d like to talk about the main attraction of the movie, Mr. Frank Grillo. If Frank Grillo doesn’t become a major star from this, I’m gonna lose my mind. He is basically the whole show here, and he carries this movie thoroughly and effortlessly. More ripped than a roman god, more badass than a Siberian tiger, and more heartfelt than the heart that got ripped out of the bad guy by Stallone at the end of Rambo: Last Blood. That last part may have been a bit much, but you get what I’m saying.

Frank Grillo Hits That Next Level 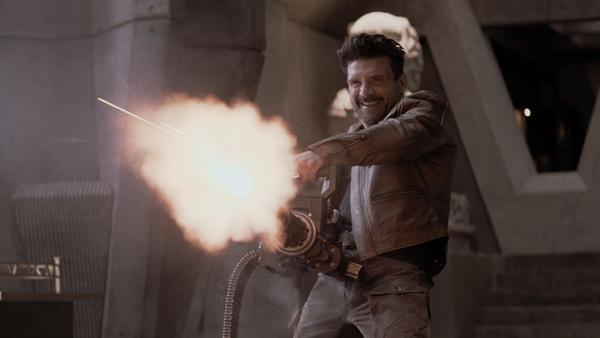 Simply put. Grillo is the perfect leading man, and that perfection is displayed extraordinarily in this. I’m saying it now, from here on out, I want Grillo as the star of every major action blockbuster. Forget Dwayne Johnson. Forget Liam Neeson. Give me Grillo! And also Scott Adkins.

The rest of the cast don’t get much to do really, because it’s almost all Grillo, but they shine nevertheless with the amount of time they’re given. Gibson is a great bad guy, Michelle Yeoh is Alaskan levels of cool, and Naomi Watts shows why she is one of the most talented actors ever in the 5 minutes of screen time she has. But the best out of the supporting cast members is definitely Selina Lo as Guan Yin, one of the many assassins who are sent to dispatch Grillo, and undoubtedly the biggest thorn in his side. She is absolutely fantastic as well as hilarious, and I hope to see her again in something soon. Preferably an action movie where she’s showing off her awesome swordsmanship. 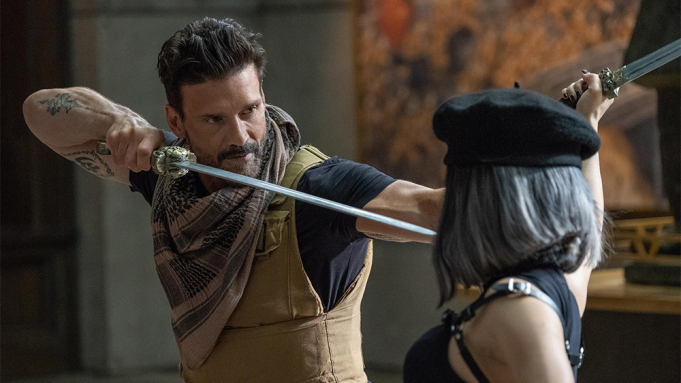 Now let’s get to the most important part: the action. And well… it was great! You get an endless buffet of action sequences, and it’s all so exquisite. Gunfights, fistfights, sword fights, car chases, mini-guns, grenade launchers, multiple beheadings, helicopter crashes, and a ton of explosions. Carnage galore! And it’s all handled incredibly by Carnahan, who moves things along at such a furious pace that the whole thing feels like an hour long. Seriously, this thing really moves. There’s never a dull moment at all. Bravo, sir. Bravo.

Any issues? Honestly? No. I can’t think of a single thing I found wrong with it. For the type of movie this was, it was absolutely perfect. The action was awesome, the comedy was funny, and the dramatic moments were genuine and emotional. The movie works on all levels. No pun intended.

So there you have it, Boss Level was everything I could have hoped for and more. And a hearty thank you to Frank Grillo and Joe Carnahan for providing us with a superior piece of action entertainment. It was well worth the wait.