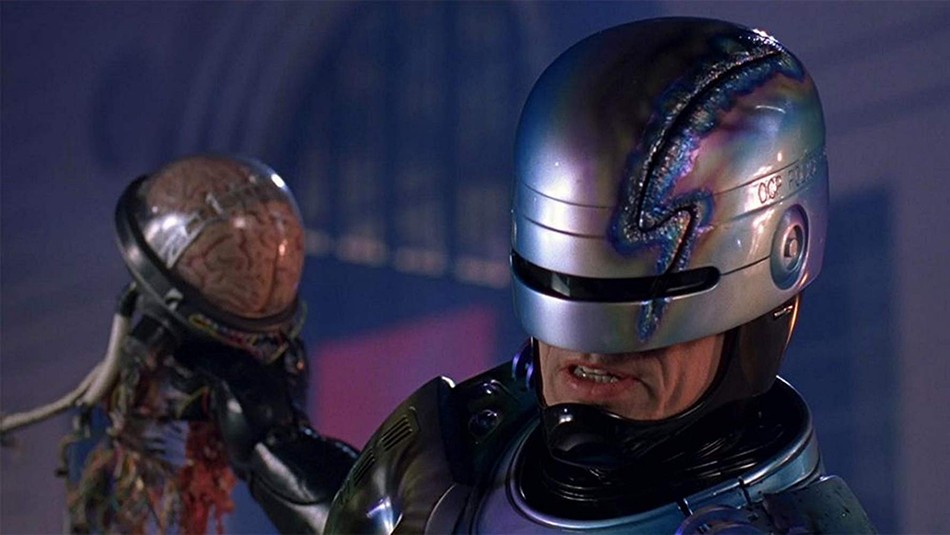 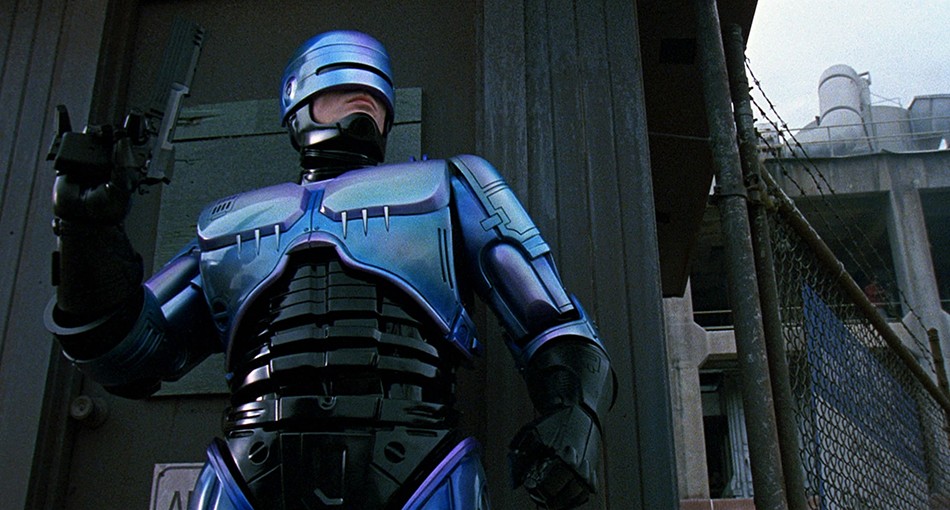 Robocop 2’s legacy lives on, but how do we reconcile with this ultimate sequel?

While the original Robocop remains a beloved classic, Robocop 2 has a more complicated legacy. Is it an underrated gem wrongly slandered by Paul Verhoeven fanboys? Is it a wretched stain upon action movie history only defended by the nostalgic?

I would go to neither extreme. Robocop 2 has exhilarating action and the magnificent Peter Weller, though it does lack other key elements which made the first a masterpiece.

Future Detroit is worse than ever: not only has the city gone bankrupt, forcing it ever more beneath the thumb of Omni Consumer Products, but crime permeates every level of society. Hot new designer drug Nuke is handed out like candy both on the street and within the police department, and little league teams commit armed robbery in broad daylight.

Naturally, Alex Murphy/Robocop (Peter Weller) has his hands full. His current mission is to hunt down Nuke dealer and cult leader Cain (Tom Noonan), as well as take down Hob (Gabriel Damon), Cain’s destructive tween henchman who uses Robocop’s inability to kill minors to his advantage. However, Murphy is still adjusting to life as a cyborg, especially since many of his OCP superiors still view him as nothing more than a product.

Meanwhile, OCP also wants to create a Robocop 2 since Murphy has been a big success, but nothing works out. However, when Cain proves himself a decent candidate for the program, things go awry, complicating Murphy’s life all the more.

How Does Robocop 2 Stack Up to the Original? 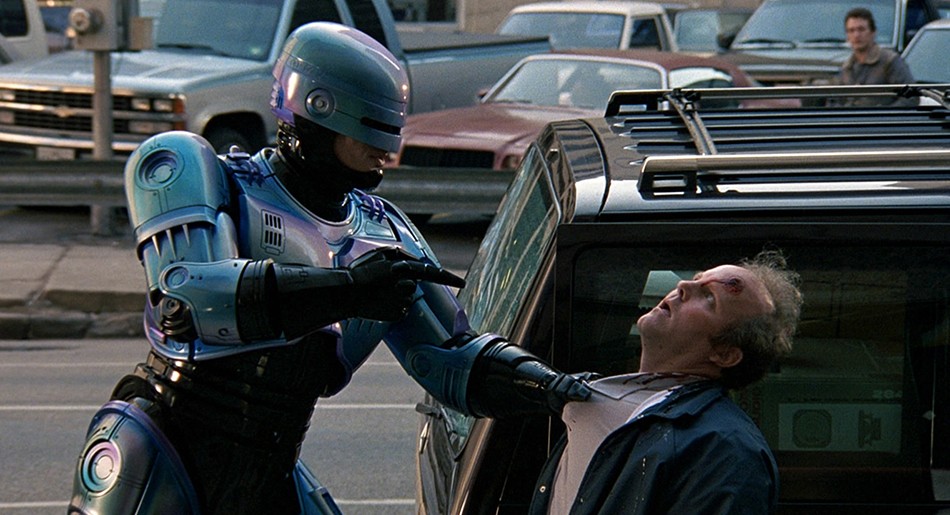 I don’t agree with every criticism leveled against Robocop 2. For instance, some claim Cain is a lackluster villain. True, he isn’t as fun as Clarence Bodicker or Dick Jones (one of UAMC’s greatest action movie villains of all time), but his Charles Manson vibe makes him a creepy adversary. When he becomes Robocop 2, he also gives Murphy one of the best battles in the trilogy, so he has that going for him too.

The character Hob usually comes under fire as well. People either find this swearing, violent kid hilarious or in horrible taste. Critic Roger Ebert was particularly disturbed, even going as far as to suggest sinister intentions on the part of the filmmakers. Ebert claimed Hob was meant to appeal to kids watching the movie despite its R-rating (after all, there was a Robocop cartoon on television) and therefore the irresponsible filmmakers were giving them a bad role model. Publications like the Christian Science Monitor echoed his perspective, calling the film “insidious.”

With all due respect, I find this reaction unwarranted and not just because wanting filmmakers to change their R-rated product on account of kids breaking rules to see it is unreasonable. From the amount of kid characters in the movie, particularly kids of criminals (think of the junkie feeding her baby in the opening scenes), one can surmise the filmmakers were likely trying to show how innocence is inevitably corrupted by such a twisted society.

Hob’s swearing like a Tarantino character might be comedic, but the film occasionally suggests he might have had no choice in how he turned out. The infamous moment where a wayward cop is vivisected by Cain’s thugs is telling: Cain forces this suddenly not-so-tough boy to watch the carnage despite his horror. The scene isn’t played for laughs—it’s gross, scary, and heartbreaking, with more than a few shades of Murphy’s murder in the original.

However, Hob’s sudden take-over of Cain’s operations is rather incredulous, even for something as overblown as Robocop, and his development after the vivisection scene is spotty. He seems to become even more of a homicidal monster, only to be played for pathos in the end—a pathos that, because it isn’t properly built up to, doesn’t pay off like it should. For this reviewer, that is a bigger issue than Hob being a violent child in and of itself. I imagine his development might be another casualty of the movie’s famously troubled production history. 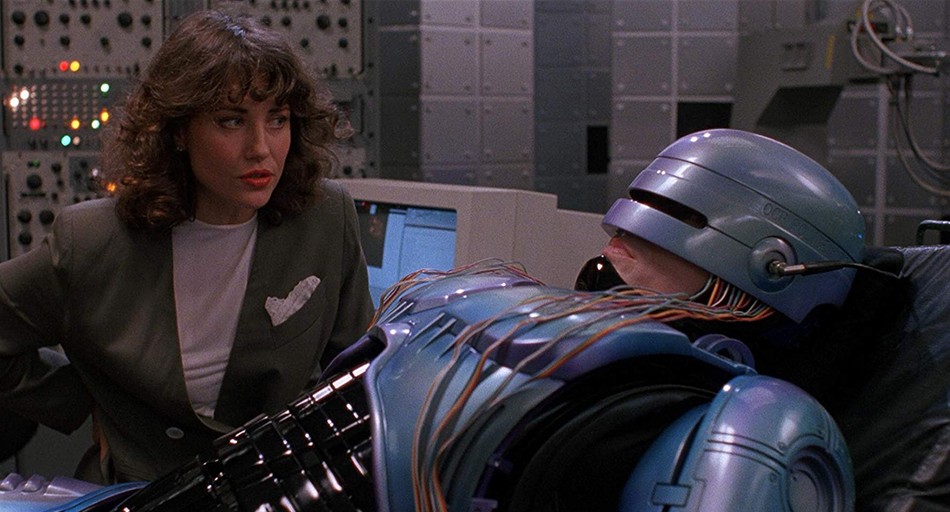 Unfortunately, the film is not as thorough with exploring its themes, coming off like a confused mess of plot threads. The film teases the audience by making us believe Murphy’s wife will try to reconnect with him, which would have been a great route to explore, showing how Murphy still has limitations due to his cybernetic existence (romantic/physical desire). But this thread is dropped as soon as it is introduced, never to be alluded to again.

Robocop 2 also swipes at PC culture when Robocop is given hundreds of useless directives to make him a better “role model” for children (one wonders if the filmmakers anticipated complaints in advance). He becomes useless as a crime fighter, instead lecturing delinquents on nutrition. But like the wife subplot, this development doesn’t last long, as Robocop fixes the problem within minutes. So much for conflict and suspense…

As a result, the story is choppy, like a series of half-baked television episodes strung together to make a feature. The pacing drags hard because there is no sense of simmering conflict with all of these mishandled characters and subplots. If better fleshed-out, Robocop 2 could have been a worthy successor to the original. As it is, it’s just a thematic sampler platter, unwilling to commit to anything in detail.

But How Ultimate is the Action?!

At the very least, the action is still well-done. Though accused of mean-spiritedness, the ultra-violence is outrageous in the manner of the first, if not always as imaginatively staged. The car chase between Murphy and Cain is a lot of fun. And the final fight between Robocop and Robocop 2 is a tour-de-force of stop-motion, and a worthy successor to the Murphy-Bodicker showdown in the first movie.

Robocop 2’s box office did not match the high numbers of the original; however, more than a few Robocop fans have fond memories of it and I can see why. Flawed as it may be, there are still many things to appreciate and fans will want to see it at least once, if only for the awesome action and Weller.

If only the same could be said of Robocop 3…


What are your thoughts on Robocop 2 and how it stacks up to the original? Let us know in the comments or on our Facebook page!