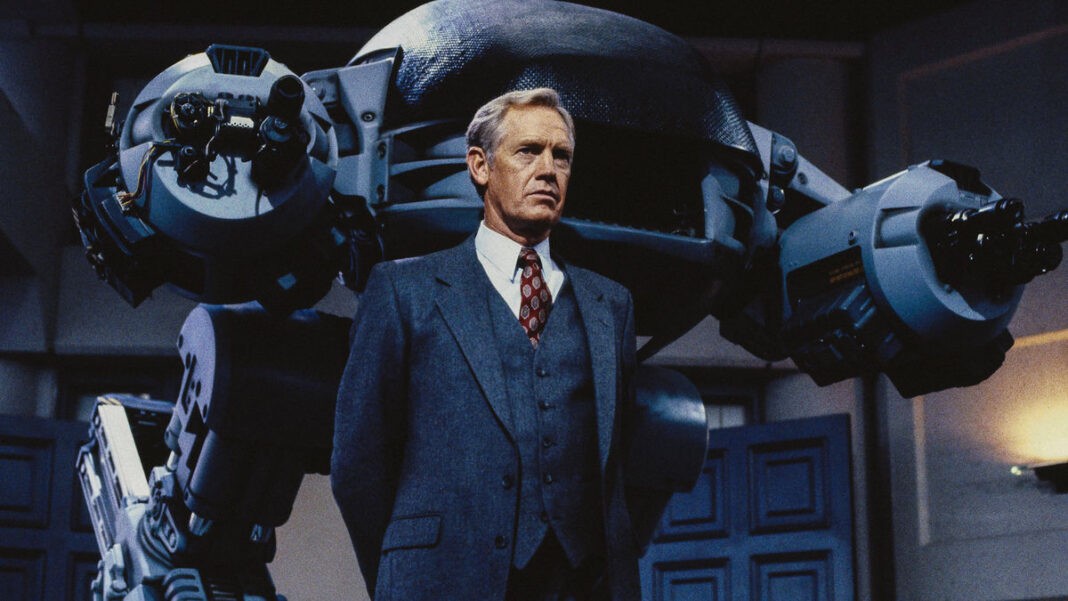 Ranking the best (and most memorable) evil corporations from ultimate action movies. 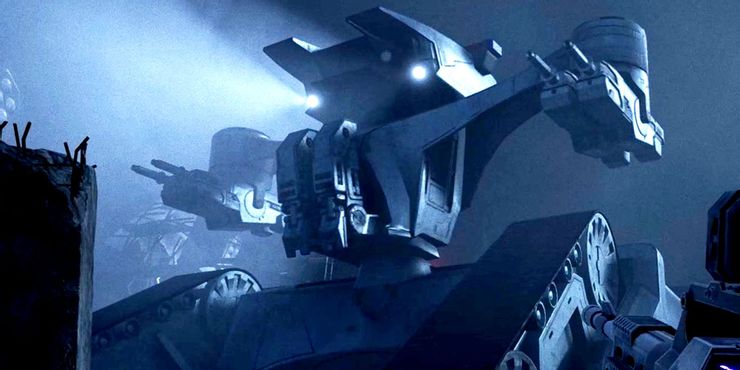 Corrupt corporations and their sinister CEOs make for perfect movie villains. While almost all corporations in films are fictional, we wouldn’t be able to relate to their machinations without the numerous scandals and dubious practices of many real-life companies. In the action genre, the negative aspects of corporate governance are often pushed completely over the top, especially in dystopic settings where their power permeates every aspect of public and political life. In this article we present the top 10 evil corporations we love to hate. Weapons manufacturers, IT giants and oil companies, here come the worst of the worst!

The Wachowski’s Speed Racer is a colorful and action-packed story about a young racer and his journey to winning the legendary Casa Cristo 5000 Race. It is also the romantic tale of a small family business that takes it up against a corporation with seemingly infinite power. Speed Racer is the greatest racing talent of his generation, and the cunning CEO of Royalton Industries wants to have him on his team. He invites the Racer family to his show off his lavish car workshop and training facilities for the drivers. After Speed declines his offer, Royalton leaves no stone unturned on and off the race track to stop Speed Racer from winning, and even sends corporate ninjas after him!

Tron still stands as the best action movie Disney has ever produced, a visually unique and action-packed roller coaster ride. The next great kid-friendly action film on our list also raises the awareness for children to be skeptical towards the activities of large IT corporations in a most entertaining way. Programmer Kevin Flynn got cheated by his former colleague Ed Dillinger, and left his company, technology corporation ENCOM, in frustration. Dillinger has since risen through the ranks, and is overseeing the Master Control Program (MCP), a ground-breaking artificial intelligence. In this particular scene he disciplines one of his employees complaining about the MCP (while Flynn and his friends are breaking into the building), and one minute later is getting blackmailed by his AI that wants to take over the world.

Weapon corporations running a secret research project with the intent on creating human supersoldiers for profit are a perfect archenemy for any movie. The pilot trial of the Hard Man program ends in a deadly catastrophe, and Hayden Cale is instated as new CEO of the company to clean up the mess of her predecessor. After getting punched in the face by angry demonstrators on her first day of work, her first board meeting becomes a showdown with crooked executives that thankfully are ripped apart later in the film by the titular character.

The Resident Evil saga was director Paul W.S. Anderson’s attempt to find out how many times one can make the same film over and over until the audience gets fed up (the answer is six times). But every new installment revealed a bit more about the monstrous machinations of the Umbrella Corporation, that unleashed a zombie plague on the world. If this happens by accident, it’s bad enough, but a company that deliberately wants to end the world is a whole new level of evilness. In the sixth installment of the franchise, Umbrella’s CEO gives a convincing rundown of the countless problems the world faces, with the disruptive solution: annihilation of humanity!

Paul Verhoeven’s mind-bending adaptation of a classic Philip K. Dick story is one of the ultimate masterpieces of Sci-Fi action cinema. The colonized Mars is an archetypal dystopic society run by the heinous Vilos Cohaagen. One of his companies, Rekall, provides memory implants for people bored with their life. Douglas Quaid (Arnold Schwarzenegger) is one of them, and decides for the fake memory of a secret agent. From that point on, he finds himself caught in a violent conspiracy, and ends up supporting a rebel insurgency on Mars. After getting caught by Cohaagen’s goons, his “true” identity is revealed.

District 9 is a powerful metaphor on human cruelty and xenophobia in general, and the South African apartheid regime in particular. As if all this wasn’t grim enough, we’re also introduced to one of the most callous corporations to ever make it into a film, weapons manufacturer Multinational United (MNU). MNU bureaucrat Wikus van de Merve is tasked with relocating stranded aliens to a concentration camp. After an accident he undergoes a grotesque transformation and is quarantined. Merwe’s father-in-law and managing director of MNU, Piet Smit agrees to have Merwe’s DNA and body parts harvested for development of advanced weapon technologies, while Merwe is strapped to a table hearing every word Smit says!

Steven Seagal’s plea for Native American’s rights and preservation of wildlife, and his uncompromising condemnation of big oil corporations is a truly unique experience. Firefighter Howard Taft has regularly been cleaning up the mess of Aegis Oil corporation’s environmental disasters in Alaska. After asking too many questions, he gets almost killed by CEO Michael Jennings’ goons, and returns with a thirst for vengeance. Michael Caine is easily the most evil CEO on this list with a terrific overacting, who has his reckoning coming big time by the “macho man with a code of honor”.

Maybe not an evil corporation by intention, but Cyberdyne’s clandestine development of Skynet after salvaging remains of the T-800 turned out to be the biggest mistake in the history of mankind. No matter who and in what timeline was trying to prevent Skynet from gaining artificial consciousness, all efforts were doomed to fail as soon as the next installment of the franchise came out. In the Terminator 2 timeline, we get to witness the spectacular attempt of Sarah Connor and the now benevolent T-800 to prevent Judgment Day from happening by breaking into the Cyberdyne building and destroying the AI lab.

If you’ve maximized your profits on earth, in the future, there’s a whole universe full of resources waiting to be depleted. This is the maxim of the Weyland-Yutani corporation that runs mining operations on extraterrestrial colonies with a complete disregard for the life of its employees. Being the sole survivor of the Nostromo’s crew in the first Alien film, Ellen Ripley’s emotional rapport to Weyland-Yutani in James Cameron’s Aliens turns into a tribunal exerted on her by soulless corporate suits, who are already secretly plotting how to exploit the Xenomorph’s traits for technology development.

The best action movie of all time also features the most ruthless fictional corporation of all time, Omni Consumer Products (OCP). OCP is a giant kraken that controls all aspects of public life, and the last step in the grand vision of it’s CEO’s (only known as The Old Man) is the conversion of Detroit into Delta City, a sprawling new municipality owned and run by OCP. The “only” problem is the rampant crime in Detroit that has developed as a result of OCP’s malignant anarcho-capitalism. Vice-president Dick Jones has the solution, but the presentation of his “peacekeeping machine” ED-209 in front of the executive board does not go as planned. Junior executive Bob Morton grabs the opportunity that presents itself after the disaster to advertise his Robocop program with the CEO. 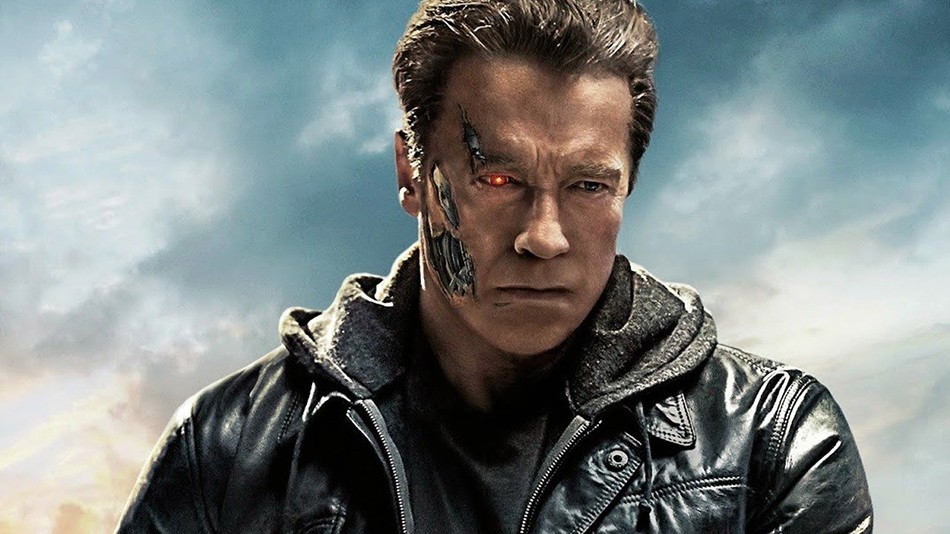