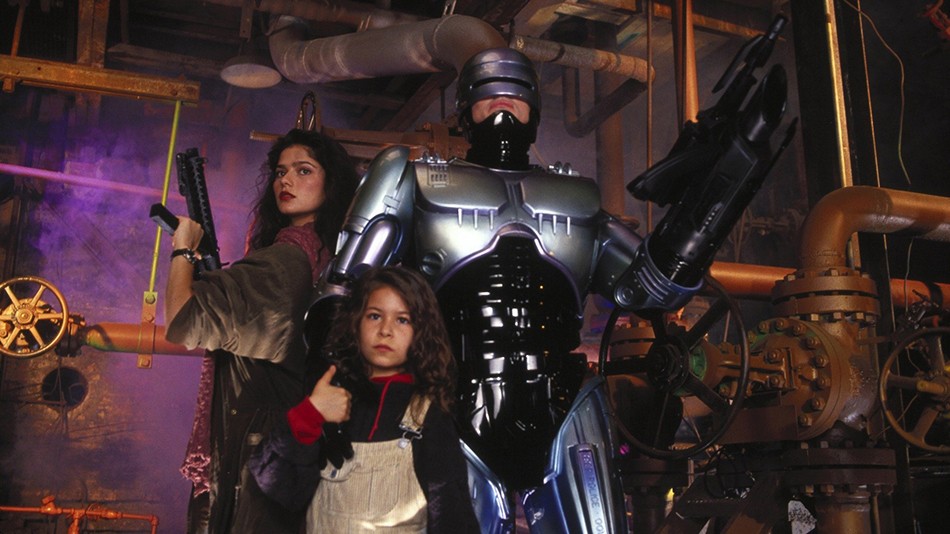 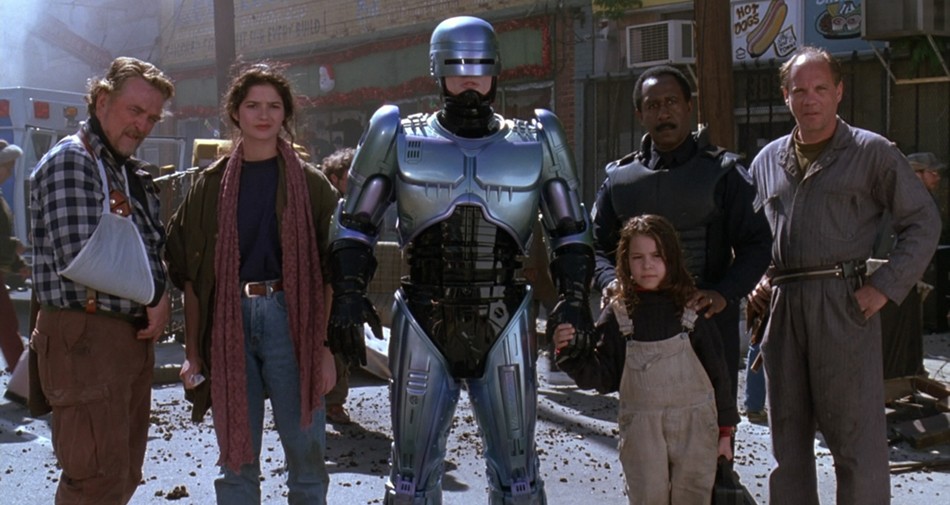 Robocop 3 is a movie that largely inspires dread and loathing from the very mention of it. I would love to say this reaction is undeserved, that Robocop 3 is a misunderstood classic.

It’s not. It’s an undignified end to the original Robocop saga that will give you a major case of secondhand embarrassment for all involved.

However, I do want to be fair, so I’ll acknowledge two things that are often considered “bad” in this movie that really aren’t terrible.

Before we dive in, take a moment to read our UAMC reviews of Robocop 1 and Robocop 2 first:

One, Robert John Burke playing Robocop. No, he isn’t Peter Weller. Yes, Weller owns this role. However, Burke does as good as anyone else could with this sewage plant of a screenplay.

Why? Let me count the ways, starting with the “plot.” 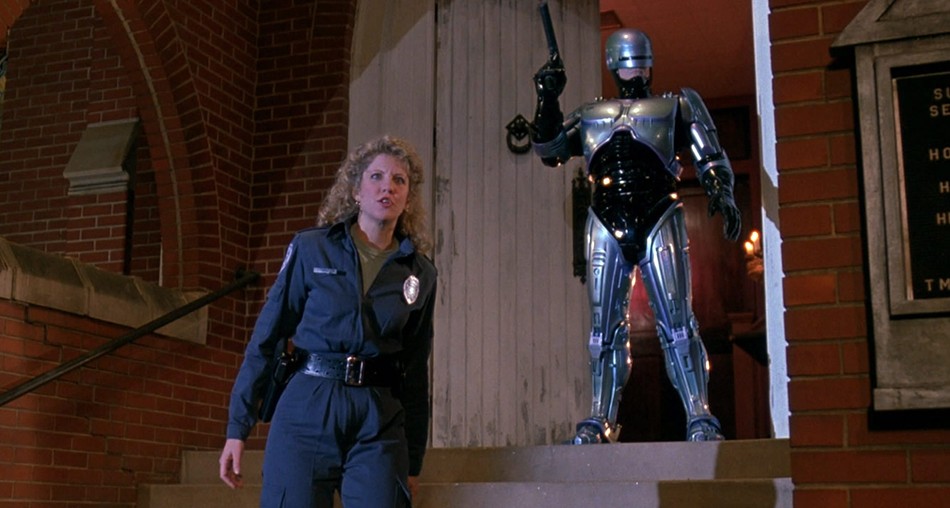 Omni Consumer Products has been bought out by Kanemitsu, which is basically the Japanese OCP. Intent on getting their plans for the utopic Delta City underway, OCP has plans to demolish the slummy part of Detroit, much to the consternation of the inhabitants. Armed forces known as the Urban Rehabilitators, led by the ruthless John McDaggett (John Castle), seek to clear out or kill any homeless they encounter to speed up the process.

Nikko (Remy Ryan), a child prodigy with computers, is a victim of the Urban Rehabilitators. Losing her parents to their brutality, she finds shelter with a group of homeless who have banded together to form a resistance movement, living in the sewers and bombing OCP property.

Then Robocop (Robert John Burke) gets drawn into the battle when all four of his directives come into conflict. (Even though his directives were allegedly erased completely in Robocop 2, but Robocop 3 laughs at continuity.)

Robocop 3 cannot be said to have a plot so much as a series of underdeveloped threads which lead to nothing. Robocop’s character development was pretty much over after the first movie, though the second film at least attempted some further exploration of his personality. Robocop 3 doesn’t care. Though technically the film has a ticking clock element, the suspense is nil. Characters are content to stand around, talk, and pick their noses while mayhem reigns.

The first Robocop had two of the greatest villains in modern action cinema. Robocop 2 had a villain with potential who was underused, but nevertheless got a cool final battle. Robocop 3 cannot be bothered to give us even a central villain, throwing out mostly unmemorable baddies.

Rip Torn is the new OCP president. He makes no impression beyond A) he’s greedy and B) he resents being bought out by a Japanese company. I don’t think he has more than twenty minutes of screen-time and even that might be generous. His shouting is entertaining though.

Bruce Locke is Otomo, the Kanemitsu robot assassin. He’s pretty cool with his collected demeanor, sunglasses, and swordplay. He could have made an interesting nemesis with more screen-time. And character development. And a decent confrontation with Robocop (we’ll get to THAT mess later).

Mako is the Kanemitsu president. He has even less screen-time than Torn and that makes me most sad. How do you have Mako in a movie and just not use him?!

The most prominent of the villains is McDaggett (John Castle). Unfortunately, he is the least interesting, just your run-of-the-mill “mwahaha I’m the English bad guy.” 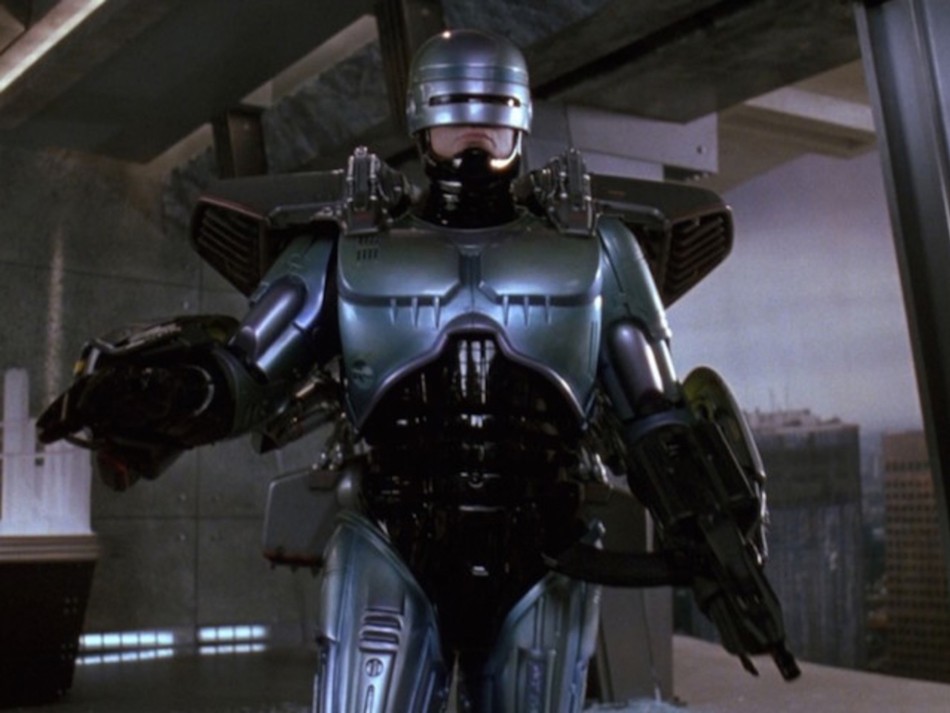 While some accuse Robocop 2 of trying to appeal to children with the nasty Hob character and looting little league team, I still say that film’s use of kid characters was meant to highlight how innocence is inevitably warped within a violent culture.

Here, the little kid Nikko is definitely there as an audience avatar for the youngsters. She’s cutesy in a way that just feels wrong for the setting. She’s also rather useless despite being a super genius who can reprogram an ED-209 to be as loyal as a puppy… by literally typing “loyal as a puppy” as a command into its system.

ED-209 isn’t the only character who got its badass license revoked either. Robocop himself is suddenly a much clumsier fighter. The punishment he takes from enemies is cringeworthy to watch, not because you feel scared for the character, but because you don’t buy that he’d so easily be taken down by these villains. In the first Robocop, it took the whole Detroit police force or heavy machinery to bring Robocop to his knees. Now it feels like a feather could kill him.

Take the battle between Otomo and Robocop. This should have been AWESOME. Instead, Robocop literally stands there and lets this guy pummel him. It’s one thing to be taken by surprise—but this happens TWICE IN A ROW. And then Robocop just lets Otomo chop him up, sitting there stupefied like this is a slapstick comedy routine. And then he lets himself get knocked over again before finally just shooting the guy. It’s a fight both boring and embarrassing—a microcosm of the whole movie, really.

I didn’t even get into everything wrong with Robocop 3, like the pathetic killing-off of Officer Lewis or the terrible supporting performances. At the very least, Basil Poledouris is back to score the movie, resurrecting the themes from the original film. Unfortunately, it only makes the contrast between the epic music and subpar content all the greater.

But it all gets down to one thing: nobody wants a kid-friendly Robocop. The appeal of Robocop is that delicious blend of biting satire and over-the-top action. By trying to appeal to everyone, Robocop 3 appeals to just about no one.

Luckily, Hollywood never EVER made the mistake of producing a PG-13 Robocop ever again.


What are your thoughts on Robocop 3? Let us know in the comments or on our Facebook page!