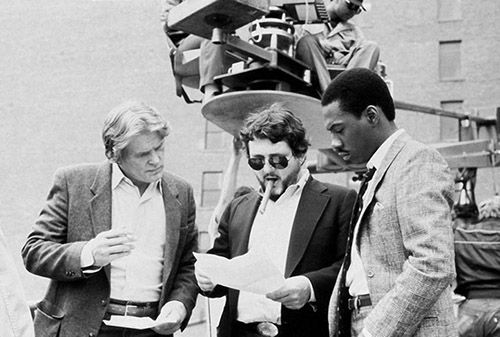 Walter Hill is one of the great directors of action cinema. He started to break into the genre when action films became popular, and he had a big contribution in shaping its style from the late 1970s and beyond. In this article, we have compiled a list of his 10 best action films. Every single film on this list is a classic in it’s own right, but as it’s a ranking, we need to put some numbers to them according to our taste, so here we go!

Undisputed is an unpretentious action drama, and the last film Hill made until now that can be recommended without reservations. Monroe Hutchens  (Wesley Snipes) is the uncontested boxing champion of Sweetwater prison, and when former world heavyweight boxing champion George Chamber (Ving Rhames) is transferred there, mobster and bookie Ripstein arranges for a fight between the two. Hill paints prison life as a romanticized microcosm, and the usual cruelties we often see in this type of films are absent.

There are no surprises, every scene serves its purpose of laying out the path towards the inevitable showdown between Snipes and Rhames, and both of them nail their antipodal characters perfectly. The film features a few brawls, but we need to be patient until the big fight, which is a fine piece of boxing action. Undisputed never rises to the dramatic heights of Rocky vs. Drago, but still is an entertaining journey into the prison boxing world.

Hill’s remake of the classics Yojimbo and A Fistful of Dollars places the story of a drifter (Bruce Willis) exploiting two rivaling gangs into a deserted town at the Texan-Mexican border during the prohibition era. Willis is perfect as the laconic man with no name (John Smith), and the film impresses with a desolate mood. Hill creates a world without rules that is inhabited by violent and greedy idiots who are armed to the teeth.

The fantastic action sequences may be a nod to John Woo with people being perforated with bullets, and copious amounts of blood painting the sand deep red. This is only speculation, but maybe Woo himself may have drawn some inspiration from Hill’s early classics that were full of bloody shootouts, so we could be coming full circle here. Last Man Standing is a bit hard to enjoy occasionally due to its depressing vibe and repulsive characters, but it is an explosive action thriller for sure!

This action fairly tale is an iconic genre entry of the late 1970s that has become of a cult flick for many people. In New York the night is owned by the gangs. After the leader of the most powerful gang is murdered, the Warriors are accused, and every other gang in the city goes after them. Hill creates a pervasive dark atmosphere mixed with a comical vibe as the colorful gangs light up the night, and infuses his film with the raw and sometimes destructive energy of adolescents.

There’s plenty of violent clashes between the gangs with some intense brawling thrown onto the screen. Maybe the action is the only part of the movie that has not aged so well, but it’s all still a blast to watch, and The Warriors is one of Hill’s coolest and most energetic movies.

Every action film in the 1980s needed to have a car chase to be even halfway credible, and this tradition can be traced back to a couple of genre classics from the 1970s, among them Hill’s The Driver. Its impact on art-house actioners such as Drive and Baby Driver has been mentioned, but we will leave the discussion of its cinematic legacy to the professional critics, and judge The Driver only by its spectacle value, which is enormous!

A mysterious get-away driver is hunted by a detective who sets up a sinister scheme to capture him. Hill created a film with simple, elegant visuals that is sparse on dialogue but big on atmosphere. The car action looks terrific to this day, with relentless chases and brutal-looking crashes. The Driver has it all: classy cars, classy people and classy visuals, a perfect package.

Trespass is another mean action thriller by Hill, who took the classic trope of the hunt for a hidden treasure and placed it into a modern urban setting. Firefighters Vince and Don find a map that points to a treasure stashed away in an old factory building. They show up at the right place but at the wrong time, when they become witness to a gang execution.

The siege between the treasure hunters and the gang is on almost from the beginning. It’s a simple setup with both parties just separated between a door and a wall. And yet Hill keeps up the tension with tense verbal exchanges, shifting allegiances, and lots of action. There’s plenty of intense clashes in the confined setting, with gun battles in hallways and through doors. Thanks to Hill’s tight direction, everything falls into place nicely in Trespass, a stand-off that delivers maximum excitement!

Rambo 3, Red Scorpion and Red Heat all came out in 1988, and the former two did not paint a benevolent picture of the Soviet Union. In the spirit of Glasnost, Red Heat balanced things out a bit, and Hill created an awesome riff on his very own masterpiece 48 Hrs. Russian police officer Ivan Danko (Arnold Schwarzenegger) sees his partner shot by drug lord Viktor Rostavili, who flees to the US and is arrested. Danko takes the journey to extradite him, but Rostavili escapes, and together with cocky cop Art Ridzik (Jim Belushi) he picks up his trail.

It’s fun to see Schwarzenegger in this role, and his charming performance is the main reason Red Heat rises above standard action fare. Every once in a while Hill throws in an action sequence with his trademark bloody shootouts, but the real gold are the exchanges between Ridzik and Danko, and a script that is poking fun at both capitalism and communism. There’s never a dull moment in Red Heat, this highly entertaining piece of 1980s buddy cop action.

With Southern Comfort, Hill painted a grim picture of a Louisiana National Guard reserve squad indulging heavily in what today would be categorized as toxic masculinity. Sent on a training mission to traverse a swamp, their only concern is to get to their evening dates with some prostitutes as fast as possible. They steal some canoes from a Cajun camp to take a shortcut across a river, and become prey in a deadly hunt by the locals. The tragedy unfolds in much detail and intensity in this hobby squad of bullies.

Hill gathered a great ensemble cast, each one of them almost singling out a particular human trait, with the voice of reason regular being hooted down. A handful of intense action sequences are properly embedded into the story, and after each violent incident things only get worse for the reservists. Southern Comfort is an absurd and violent tale, and a spectacularly thrilling insight into the darker aspects of the human condition.

This self-proclaimed “Rock’n’Roll Fable” is another timeless banger from Hill. Famous singer Ellen is abducted by the kooky Raven and his motorcycle gang. Her former boyfriend Cody is called for help, and together with Ellen’s manager Billy and army veteran McCoy they go on a music-fueled journey to rescue Ellen. Vintage cars, shotguns and rockabilly fashion are just some of the ingredients Hill throws into the mix to create one of the most unique 1980s actioners.

Dialogue is cheesy and the plot is all over the place, but Hills genuine love for film-making radiates through this film like no other from his career. He also does not forget to shine in the action department featuring plenty of cool brawls and street fights. With awesome musical interludes, a goofy charm and feel-good vibes all over, Streets of Fire is just a ton of fun!

Testosterone, sweat and blood are the main ingredients for this epic 1980s action thriller. A border town is plagued by drug traffickers from Mexico, and a violent triangle is created between Jack Benteen (Nick Nolte) and his Texas Rangers, the drug cartel led by the charismatic Cash Bailey (Power Boothe), and an undercover government task force. Extreme Prejudice is so hard-boiled, it borders on the ridiculous.

The dialogues are chock-full of macho outpourings every manly man would want on their coffee mug. And a dream cast of character actors contributes enormously to the success of the film: Nick Nolte, Powers Boothe, Clancy Brown, Michael Ironside and William Forsythe. The action sequences are the best Hill made in his career, with iconic shootouts full of brutal and bloody violence. Extreme Prejudice is one of the meanest and most bad-ass films ever created!

The film that launched the buddy action genre and Eddie Murphy’s career is our winner, and every other buddy cop actioner owes its very existence to Hill’s opus magnum. San Francisco Detective Jack Cates (Nick Nolte) cop gets convict Reggie Hammond (Eddie Murphy) out of jail for 48 hours to help him find escaped killer Albert Ganz. Hill and his co-writers created an ingenious recipe that was copied countless times. Two characters of fundamentally opposite character are forced to work together and complement each other in unexpected ways.

Murphy’s quips and Nolte’s constant aggravation give rise to many funny moments. Hill also inserts his trademark graphic violence with the classic suite of fights, shootouts and car chases, and every single one of them hits like a train. Hill followed up with a sequel in 1990, that turned to be just another entry in a huge wave of buddy actioners, so let’s just stick with the original!