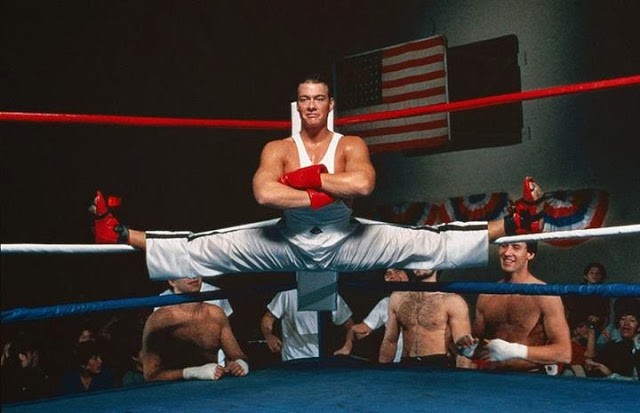 I finally had a chance to burn through the entire first (and only) season of Jean-Claude Van Johnson on Amazon Prime. While I enjoyed it, I was expecting something different. I was hoping for the ultimate JCVD experience, and what we got was an introspective look at Jean-Claude Van Damme’s humble beginnings, his career and some action. It was fine, but it wasn’t ultimate enough. That got me thinking – what would make the ultimate JCVD movie? I came up with these 5 things guaranteed to make JCVD movies ultimate and awesome!

One Jean-Claude Van Damme is great, but two JCVDs is even awesomer! Wait, is awesomer a word? Probably not, but who cares! Beginning with Double Impact (1991), JCVD has played twin characters in 4 movies – the others being Maximum Risk (1996), Replicant (2001) and The Order (2001). He also played two characters in Universal Soldier (1992), but they were technically the same person. He did it again in Jean-Claude Van Johnson and there have been rumors that he’ll play a twin again in the next Expendables movie. Want to make it even more ultimate? Triplets!

Timecop (1994) relied on one of the ultimate sci-fi staples – time travel. But, time travel movies can be expensive, especially if you go forward in time. By setting up rules that time travel to the future couldn’t work because it hasn’t happened yet, they were able to keep the budget low while capitalizing on a high-value scientific plotline. Same is true with Universal Soldier (1992), Replicant (2001) and Cyborg (1989). Want to make it more ultimate? Time traveling, reanimated clones!

There is no move more polarizing for a man than the splits. Some see them as a strange thing for a man to do, others view it as the ultimate in muscle control. Either way, JCVD is the master of the splits. It would be hard to say how to make JCVD splits more ultimate than this – splits between two moving trucks. Maybe two planes?

Say what you will about JVCD’s acting abilities, for me he is the master of the dry, cool wit needed to be an action hero.  For me, the “I guess I should have told him to ‘freeze’” line in Timecop is the ultimate JCVD line, followed closely by “Take your fancy clothes and your black silk underwear and go back to Disneyland” in Double Impact (1991). But, if one were, to say, write the ultimate JCVD line, they could leave it in the comments.

Bloodsport (1988) launched JCVD’s career, and it also birthed a common thematic element for many of his movies – the fight competition. Several JCVD films, including Kickboxer (1989), Lionheart (1990) and The Quest (1996), had him fighting his way to the top of some type of competition. From a production standpoint, it makes for a budget-friendly project because you only have to build one set and bring in new competitors. Plot wise, it can get a little boring. You can only look at groups of people chanting KUMITE for so long before it gets old. Want to make it more ultimate? Timecop back to a fight competition, to fight your twin!

Here’s the pitch: Jean-Claude Van Damme is William “Splits” Moreau, a former Muay Thai kickboxing champion who joins an elite squad of mercenaries hired to protect the world from time-traveling prize fighters. After being abandoned by his team and left for dead in a 1990s underground martial arts tournament, Moreau is reanimated as a cyborg fighter in present day Thailand. He remembers only two things – how to kill and how to mambo. Bollywood ending!