Ranking the best ACTION films from the one true God himself — Keanu Reeves! 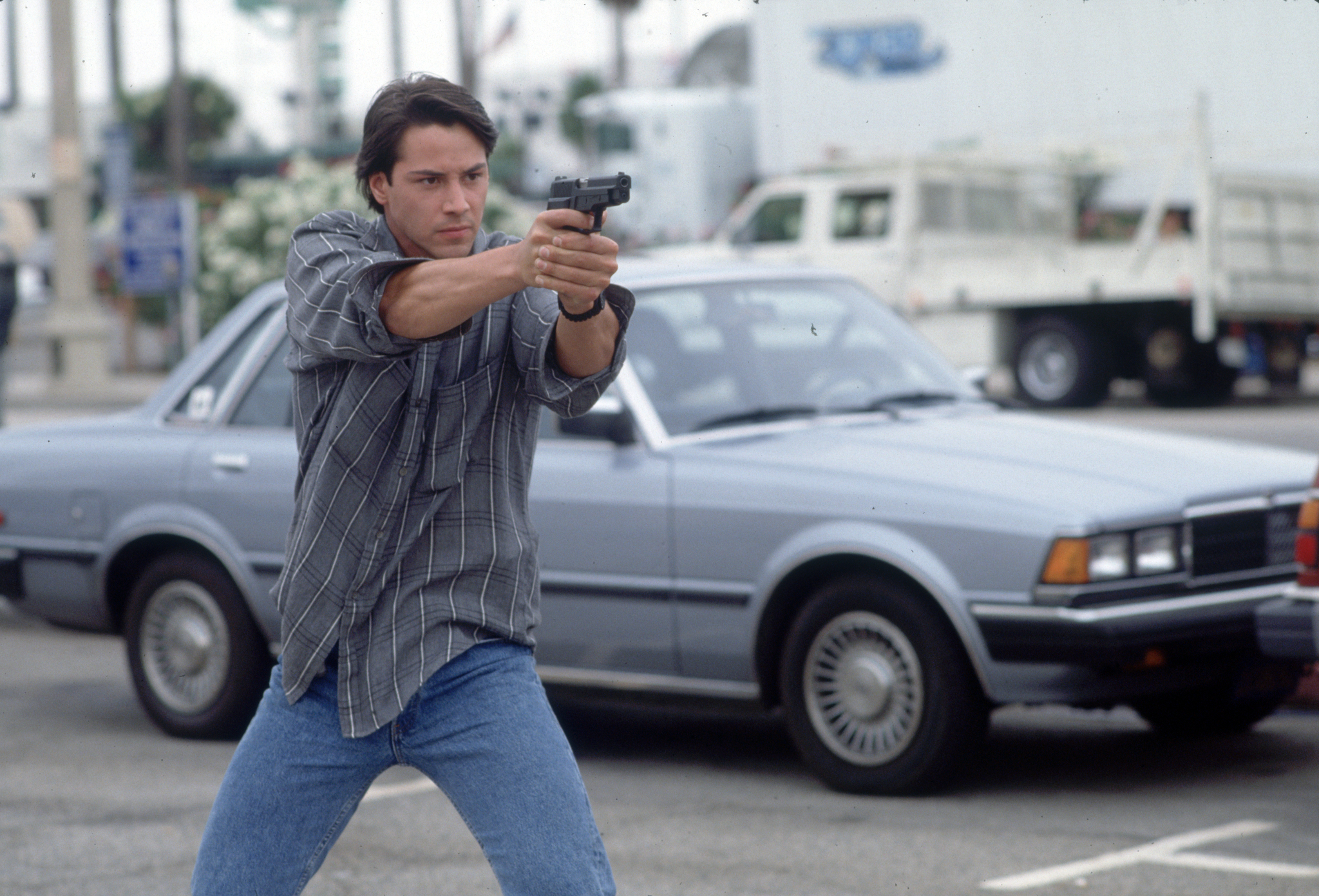 Keanu Reeves emerged in the 1990s as a new kind of action hero. Gone were the days of the topless, muscle-flexing behemoths who were shooting machine guns from the hip. A slim guy, with a calm and often melancholic demeanor, he brought a different type of character to the genre, and his down-to-earth attitude enabled audiences to identify more easily with him.

What he has in common with the heroes of old is that in his films he typically is a man of few words, and also piles up massive body counts in several of his classics. In this list we compiled Keanu Reeves’s 10 best action flicks, with more to be added in the years to come for sure!

Maybe they are not action movies in the traditional sense, but the time-traveling, rock-infused adventures of Bill & Ted are filled to the brim with excitement and adventure. The two friends embark on a quest to become the band that creates a harmonic utopia for mankind in the future. Their first obstacle is to pass their high-school history exam, but a phone-booth-turned time machine comes to the rescue, leading to many excellent encounters with legends of history.

Bill (Alex Winters) and Ted (Reeves) are just as likable and charming as they are clueless and fearless. They hook up with medieval princesses, start a band with the Grim Reaper, and have a friendly chat with Sigmund Freud. Humanity was graced two equally cheerful and creative films in 1989 and 1992, and a glorious return in 2020 that marked the conclusion of the trilogy. Party on, dudes!

47 Ronin is based on a historical epic of 18th Century Japan, and multiple films about it were made in its country of origin before Hollywood waltzed in. Kai (Reeves) sees his master Asano driven to suicide by the ruthless Shogun Tsunayoshi. Kai and Asano’s samurai are banished from the land and need to survive in a monster-infested wilderness, while plotting their revenge.

The film is an interesting experiment mixing a Japanese medieval setting and characters with monsters and samurai action. It all works together reasonably well, and the movie is a feast for the eyes with colorful costumes and lavish locations. Reeves does what he does best, kicking lots of ass with a stoical attitude. 47 Ronin ends up being a tad too generic to be a memorable fantasy actioner, but there is enough charm to this slightly nonsensical affair to keep you watching.

With Man of Tai-Chi Reeves tried two new things: playing a villain and directing a film. Rich scumbag Donaka (Reeves) organizes deadly fight tournaments. He invites Tiger Chen (played by Tiger Chen), a talented Tai Chi disciple, to join his fight club. Tiger, who is in dire need of money to save his master’s temple, reluctantly agrees, and gets trapped in a spiral of violence and rage.

Tai Chi can’t be used for fighting, you say? Man of Tai-Chi says otherwise! With the combined talent of Tiger Chen in front of the camera and legendary choreographer Woo-Ping Yuen behind it, the film delivers martial arts battles of the highest caliber. They are not as intense and spectacular as other classics that came out in Asia around that time, but they all look pretty awesome. Reeves hams it up splendidly, and his first venture into the directing business became a full success!

Street Kings is another great entry to the urban cop thriller genre. Undercover cop Ludlow’s (Reeves) former partner is killed, and Ludlow becomes a suspect.  He starts his own murder investigation, and stirs up a hornet’s nest of corruption and organized crime. Police thriller expert David Ayer switched from the writer’s desk (Training Day, Dark Blue) to the director’s chair, and he was able to elevate the average script with brutal action and hard-boiled characters.

Reeves as trigger-happy, alcoholic cynic delivers one of the most intense performances in his career. What Street Kings shows us has all been done before, but Ayer created a nice package that never fails to entertain, and is guaranteed to have you at the edge of your seat!

Director Andrew Davis delivered another banger in the vein of his masterpiece The Fugitive. Eddie (Reeves) works as technician for a University project that aims to produce free and clean energy from hydrogen. The experiments are successful, but the laboratory explodes. Eddie is framed as the prime suspect, and discovers a massive conspiracy while on the run.

Chain Reaction is an action-packed advertisement for green hydrogen that is surprisingly relevant for our time, even though the science doesn’t fully check out. Reeves does a fine job as technician-turned action hero, and he is such a nice guy in this film, a genuinely caring human being. While not breaking new ground apart from its premise, Chain Reaction is a clever film that delivers plenty of thrills and spectacle with a good chunk of explosions and wrecked vehicles.

Johnny Mnemonic may well well be the ultimate cyberpunk movie (unless you are in favor of entry #4 on our list), not least because cult author William Gibson wrote the script for this Sci-Fi action extravaganza. In the near future, people suffer from the Nerve Attenuation Syndrome that is caused by an overexposure to digital technology. Johnny carries a chip in his brain that has the cure for the disease on it, and becomes the target of multiple factions going after the data.

Johnny Mnemonic pulls of the impressive feat of being silly and thoughtful at the same time. There’s cheesy dialogues and acting (including Reeves), psychedelic cyberspace sequences, and a cyborg dolphin, but also commentary on humanity’s enslavement to technology, a post-democratic world order, and problems with Big Pharma. Johnny Mnemonic hits viewers with the intensity of a tornado, and is one of the most fun version of a cyberpunk world on celluloid.

In 2005, it was time again for Reeves to shine as an action hero, this time as the disillusioned and cursed demon hunter John Constantine. He stumbles upon an apparent suicide case, but when he is repeatedly attacks by hordes of monsters, Constantine discovers the devil’s entire army is on the verge of entering the human world. Based on a comic book series, Constantine is more than just The Exorcist as an action flick, and the most insane exorcism in movie history just marks the start of a film never relents.

John Constantine has an impressive arsenal of biblical weapons at his disposal: blessed knuckles, a holy shotgun and a flamethrower with dragon fire. But the film has a lot more offer than goofy gadgets. The pacing is perfect, the neo-noir visuals create a grim ambiance, and the many spectacular action sequences hit like a train. Constantine is a fantasy horror classic, and one of the best comic book flicks ever made.

Many people identify Keanu Reeves mostly with his character Neo. The Matrix gave us one of the most iconic action heroes, and so much more. Computer programmer Thomas is drawn into a war between cyber-terrorists and government agents. After meeting terrorist leader Morpheus reality literally crumbles before Thomas’ eyes and he begins to understand his role in the war to save the human race.

The Matrix effortlessly combines deep philosophical themes with bullet-laden exchanges, and each of the Hongkong-style inspired action sequences is a spectacular warping of reality with an almost obscene amount of magazines being emptied. Few movies provide an experience as singular as The Matrix, an action blockbuster and a piece of art. The film was followed by three unnecessary and astonishingly mediocre sequels, so you can better watch the original film three more times instead.

John Wick is the sapling in the barren desert that action cinema on the big screen increasingly became since the 2010s. The film catapulted Reeves back into superstardom, and it’s totally justified. Former mob enforcer John Wick receives a dog as a post-mortem gift from his wife. When the dog is killed by the son of a Russian mob boss, Wick embarks on a blood-drenched revenge crusade against New York’s criminal underworld. Reeves is cool and menacing, and his John Wick became one of the most bad-ass action heroes in cinema history.

With energetic and unapologetically brutal action sequences, director Chad Stahelski created action movie perfection in every frame, and delivered spectacularly choreographed gun fu, the likes we’ve not seen since John Woo’s classics. The first film is the best, but part 2 and 3 – which expanded significantly on the world-building – are almost as great. And with the fourth part on the horizon as of this writing, we hope the franchise keeps going for at least another decade!

Director Kathryn Bigelow landed several masterpieces already early on in her career, and Point Break has become a legendary entry to the action genre. FBI graduate Johnny Utah (Reeves) joins the LA bank robbery task force. The most notorious gang of bank robbers is suspected to be found among surfers. Johnny goes undercover, and gets drawn into the free-spirited lifestyle of the surfing community, that is led by the charismatic master surfer Bodhi (Patrick Swayze).

Bigelow sketches surfers and cops as two groups who couldn’t be further away from each other with their ideas for how a good life should be lived. Keanu Reeves and Patrick Swayze represent the respective lifestyles, and both deliver some of the best performances of their career. The numerous action sequences are exciting, filmed masterfully, and don’t need bullet storms or giant explosions to hit hard. And the surfing sequences are so beautiful! Every action fan will be enthralled by this incredibly atmospheric and captivating ride, one of the greatest off-beat actioners of all time.

Fasten your seat belts, this bus will never stop! A terrorist places a bomb under a bus, that will explode if the vehicle’s speed drops below 50 mph. Bomb squad specialist Jack Traven gets on the bus, and tries to prevent the catastrophe. Around this simple but ingenious premise director Jan De Bont constructed a series of some of the most insane action sequences ever created.

The many obstacles for the unstoppable bus are the perfect recipe for plenty of thrills, and in line with theme of unstoppable vehicles, De Bont wraps the bus chase in a nerve-wrecking prologue featuring a sabotaged elevator, and the grand finale in a subway train without brakes. Reeves is at the absolute top of his game, radiating coolness combined with a healthy dose of recklessness. Speed is the very definition of non-stop action, an all-time action classic that holds up perfectly to this day.