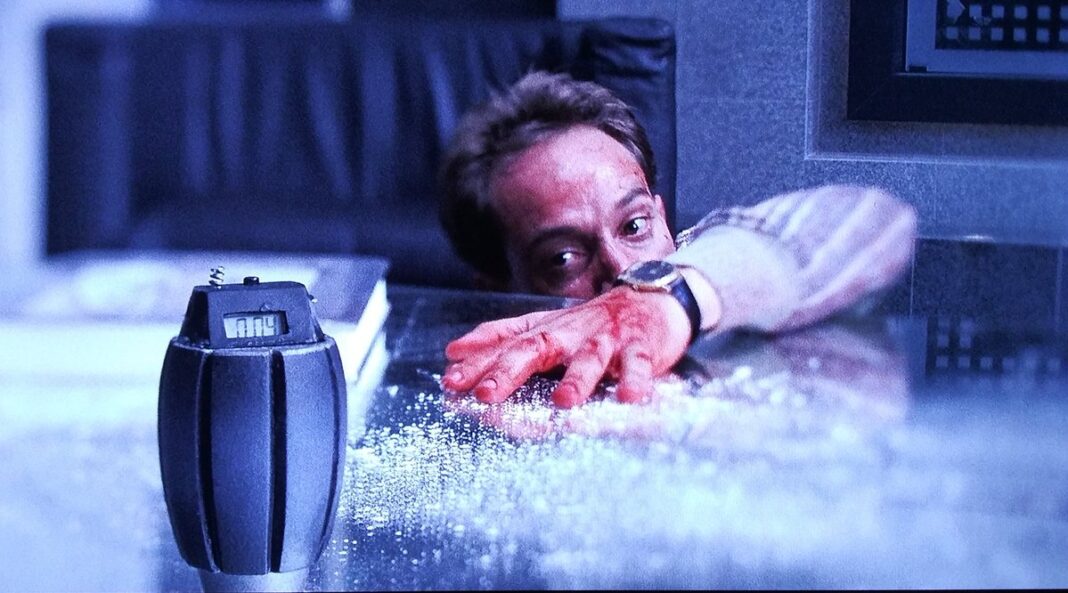 Hand grenades are a great means to crank up the mayhem level in action movies. Always readily available to both good and bad guys, a thrown hand grenade creates excitement every time, as the delay before the explosion opens up all sort of avenues for things to go not as planned, and usually having someone die a horrible death. We’ve compiled the 10 best clips involving hand grenades from great action movies to honor this handy instrument of small-scale destruction.

A great flick with many insane action scenes and an impressive performance by Salma Hayek, the movie is all about Everly defending her family and herself from relentless attacks by the Yakuza. The next attack wave on her apartment starts with a mobster and his killer dog who really likes to play catch. And after bringing her daughter and mother temporarily to safety, Everly has a very special welcome for an elevator filled with gang members.

Part of Mel Gibson’s rehabilitation trajectory in Hollywood, Get The Gringo is a funny and action-packed film with Gibson back at the top of his game. In this particular scene, “The Gringo” lures crime boss Fowler (whom he was hired to kill) to a business meeting with a rich industrial. While he could have chosen any weapon to dispose of Fowler, he decides to take him out in style, big time.

One reason bad guys usually tend be on the losing end in action movies is their disregard for even the simplest of rules. One of them is don’t load your car full of hand grenades when going on a car chase! Shadow Company boss McAllister learns this lesson after his driver is shot by Murtaugh. The car derails, crashes with a bus, and McAllister spends the last seconds of his life agonizingly staring at his stack of grenades.

This French action thriller is not stingy with creative and ultraviolent ways to dispose of its characters. One of them is a frantic car chase between the Dobermann gang and a motorized police officer. While brawling through a lowered car window, he gets a hand grenade stuffed into his helmet. His explosive demise is commented by the lunatic priest Elie: “He just entered the paradise of the headless.”

Words can hardly describe the old-school action inferno that this movie is. Tango & Cash assault the armed fortress of crime lord Perret, and his henchman Requin appears holding Tango’s sister Katherine hostage. A brief, but awesome fight begins, and we are reminded of why you should tighten your belt when your opponent brings a hand grenade to a fist-fight.

Why ‘Tango and Cash’ is the Penultimate Film of 80s Action

Outnumbered and unarmed, Jet Li’s character Liu hides in the laundry room of a hotel from his opponents in one of the many bonkers scenes of this martial arts action classic. After breaking down the door, police chief Richard shows us how he likes to treat his employees. He kills one of them who refuses to go after Liu, pushes another one into the laundry chute, and uses a third as a human shield against a bounced back grenade.

Starship Troopers is another controversial Paul Verhoeven classic, but no one in their right mind will debate the awesomeness of its action scenes. Totalitarian poster boy Johnny Rico gives his own meaning to the phrase “It’s what’s inside that matters” when he takes on the giant tanker bug and its flaming acid dispenser.

Robocop is the greatest action movie of all time, and Clarence Boddicker possibly the most bad-ass movie villain of all time. On behalf of OCP vice-president Dick Jones he pays a visit to Bob Morton, who is running the Robocop project. Morton celebrates the first successful deployment of his creation with some “models” and nose candy, when Boddicker knocks on his door. What happens next is movie history.

During the showdown of John Woo’s and Van Damme action masterpiece hand grenades are flying left and right, and we have two great clips for you. Van Damme plays Chance Boudreaux, and his confrontation with main villain #1 Pik Van Cleef is action movie perfection, you need to see it for yourself. And for his fight with main villain #2 Emil Fouchon we are treated with another iteration of the “don’t wear loose pants to a hand grenade fight” rule.

The honor of creating the ultimate hand grenade moment goes to Rutger Hauer and Gene Simmons. After beating up terrorist Malak, who also killed his girlfriend, bounty hunter Nick Randall shoves a hand grenade into his adversaries’ mouth to get his compliance. He takes him to the police but decides to skip out his bounty just this one time and rather see Malak’s head explode.