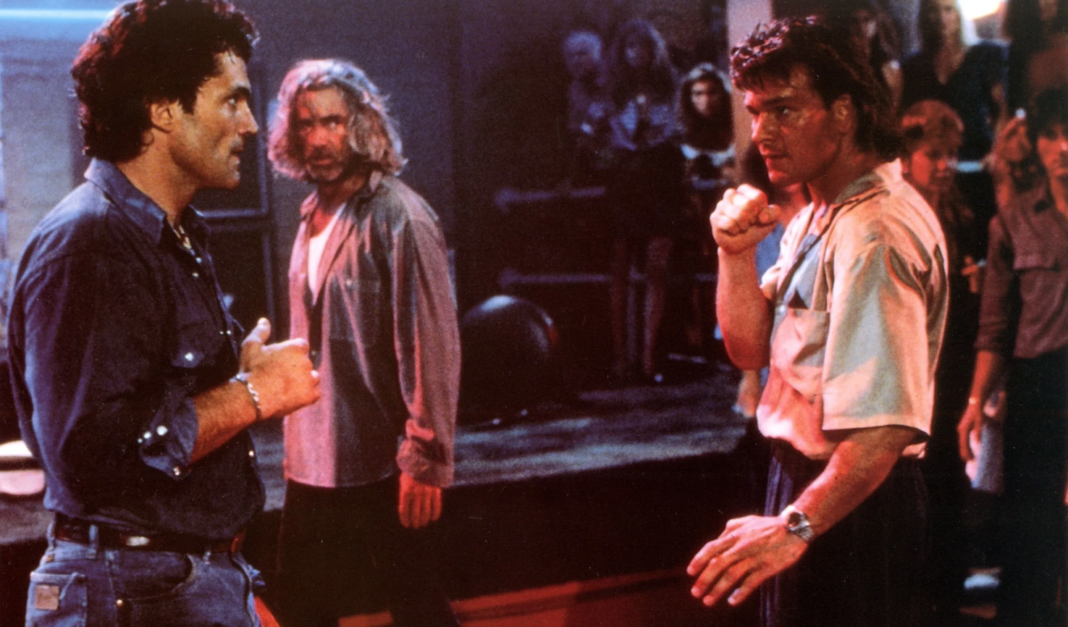 From Road House to Avengement, we rank the best bar fight scenes in action movie history. 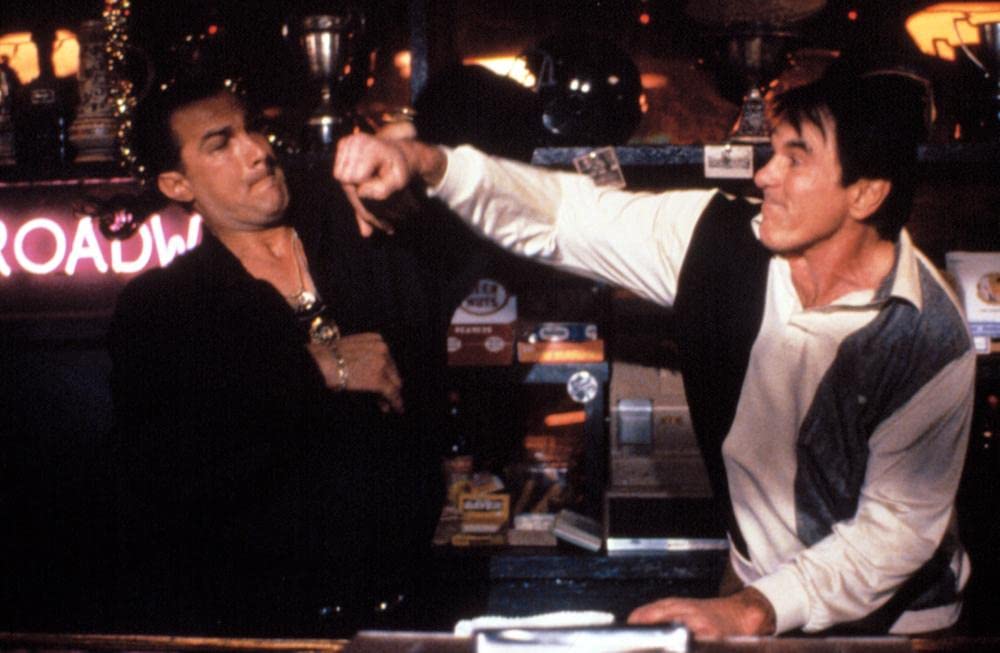 Bars and nightclubs are familiar places to all of us. Maybe for that reason bar fights in action films resonate especially strong, and you may have even been caught in one! Aggression can multiply after a few beers, and the confined setting provides many opportunities for smashing people into furniture and through windows.  In this list we’ve compiled the 15 most awesome fights and shootouts in bars and related locations, so grab a drink and enjoy!

Peckinpah’s most upbeat film is a terrific homage to truckers, and this adventurous road trip features a chaotic brawl in a freeway diner. Trucker Rubber Duck (Kris Kristofferson) gets into one of many quarrels with crooked sheriff Lyle and his deputies, and a round of name-calling escalates into a more physical confrontation. People are shoved over the bar counter and smashed onto tables, all filmed in Peckinpah’s trademark slow-motion style.

Riot is a DTV action classic from the masters of cost-efficient carnage PM Entertainment, with Gary Daniels at his physical peak. A city-wide riot has broken out, but ex-SAS operative Shane just wants to enjoy a pint. His buddy Williams is jostled by a by softball player, who is drowning his frustration that their match got canceled. The whole sports team thinks they can take their anger out on Shane and Williams, but get a lesson in roundhousing instead.

The Killer is the ultimate romantic action film, a poem written in blood. Contract killer Jeffrey’s next job is to take out some gangsters in a nightclub. Singer Li gets caught in the crossfire, and loses her eyesight from a misfired bullet. The overture to Woo’s opus magnum – albeit a comparatively brief sequence for his standards – sets the stage for the whole film with its dreamy imagery, tragedy and half a dozen people turned into Swiss cheese.

This Motown cult flick has it all, fantastic music, sexy people, and cheerful action! In this urban fairy tale, we follow the adventures of martial arts prodigy Leroy to attain the magical “Glow”, an aura that surrounds the best fighter in the world. His quest is hampered (amongst others) by loopy music producer Eddie Arkadian who has taken Leroy’s love interest and nightclub owner Angela hostage. When Leroy comes to the rescue the stage turns into a martial arts dance battle, but even the nastiest brutes in town are no match for him and his friends.

The Last Dragon: How to Remake a Martial Arts Classic in 6 Ultimate Steps

In the penultimate 1980s macho action classic, traveling philosopher Dalton finds his calling as master bouncer to straighten out the patrons of a run-down bar in Missouri. Crime lord Wesley doesn’t like this and when he waltzes into the bar one day, his master henchman Jimmy takes out the whole bouncer crew until Dalton intervenes.

The T-1000 makes an iconic entrance, arriving naked in his time capsule. He walks into a biker bar and requests one of the patrons to hand over his “clothes, boots, and motorcycle”. Everyone jumps at the cyborg, but it’s hardly a fair fight, and surprisingly he leaves everyone crippled but alive.

Dobermann is an ultimate classic of European action cinema, an all-out assault on viewers senses.

The finale of the film is a delirious, stroboscopic bloodbath that starts off with a police raid on the nightclub where the Dobermann gang celebrate their latest coup. With both sides armed to the teeth, the venue becomes the stage of a massacre, but the DJ keeps playing until the bitter end.

Bar fights have become a minor tradition in films of modern action maestro Jesse V. Johnson, and Debt Collectors has one of the best. When reprimanding a couple of drunks, Bouncer French needs to endure a tirade of offenses about his English heritage before he beats the daylights out of the “geriatric yank fucks”.  It’s a short and sweet fight, with Adkins demonstrating once again why he is one of the greatest action stars of our time.

Robert Rodriguez’ first masterpiece is high-octane cinema of the strongest caliber. El Marichi seeks to kill villain Bucho, who murdered the love of his life. He walks into a bar filled with Bucho’s henchmen, who have the habit of stowing a pile of weapons under their tables. Fortunately, El Mariachi brought a guitar case full of guns himself, and a vicious saloon shootout Gun Fu style begins.

VFW aka Bar Massacre: The Film, delivers a fantastic re-imaging of grindhouse classics with an Assault of Precinct 13 type of premise. A group of war veterans is besieged in the bar of the local VFW by a gang of drug addicts. The gang manages to break through the door, and the barroom becomes the stage of an insane bloodbath.

Two wise-ass cops go after a Yakuza gang in this old-school masterpiece. LA cop Kenner (Dolph Lundgren) eats in his favorite Japanese restaurant when the Yakuza pay a visit to extort protection money. He easily disposes of them, but when his new partner Murata shows up afterwards, they run into a slight misunderstanding.  The sequence checks all the boxes for an awesome bar fight with people thrown over the counter, out of the window, and the whole place being shot to pieces.

“What does it take to change the essence of a man?” The answer: Two kicks to the balls and a broken nose. In On Deadly Ground Forrest Taft (Steven Seagal) takes it up for the environment and Native Americans. In the local bar, Taft protects a patron from some bullies. His intervention turns into a classic bar fight, and the barkeepers call “Don’t break anything!” goes unheard.

This cult flick from Robert Rodriguez gave us a unique blend of a crime thriller a la Natural Born Killers and a splatter horror comedy. The criminal Gecko brothers celebrate their escape to Mexico in the Titty Twister bar. A dispute with the doorman is the smallest of their problems, when the bar crew shows its real face and turns into a horde of disfigured vampires. Shotguns and stakes become the weapons of choice, and the ragtag group of humans gets showered in ooze and blood.

Avengement is another masterpiece from Jesse V. Johnson and Scott Adkins. The tragicomic story of Cain’s failed stint in the criminal circuit, followed by several years in prison, culminates in a final standoff against the gang of his crooked brother. This sequence will give you a concussion and nosebleed from just watching it. It’s street violence to the extreme with metal bars and bottles becoming lethal weapons. All the rage that built up in Cain over the years is released in these few minutes, and gives us one of the best fights ever put on screen.

The title for best bar fight in action movie history goes to Brooklyn cop Gino Felino (Steven Seagal), who sets out to a neighborhood hunt for psychopathic criminal Richie. During his search, he stops by the bar where Richie’s brother hangs out. Gino strolls almost casually through the venue with his ego in total overdrive mode, and invites the crowd to take a punch at him. In return, he aikidos everyone into the ground, dealing out plenty of broken noses and shattered bones.